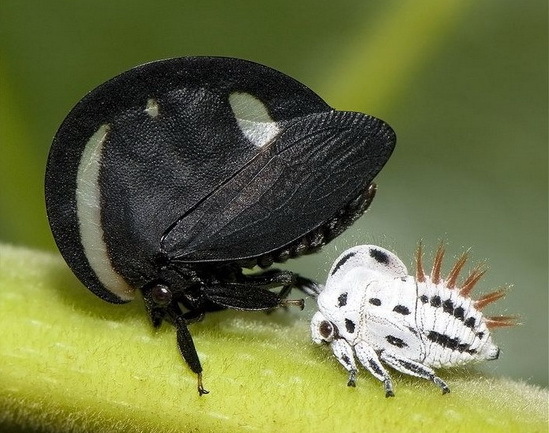 Today, the Earth got a little hotter, and a little more crowded.

It’s Pretty Black and White: Saving BUB, Beautiful Unique Biodiversity, as in this Amazon treehopper and its child, is another reason to preserve carbon storing forests. Source Pinterest

Cutting Down A Rainforest Stops The Rain – and ultimately has caused drought in Sao Paulo, Brazil, and elsewhere. Source Greenpeace

OO Watersheds Lost Up To 22% Of Their Forests In 14 Years –
Here’s How It Affects Your Water Supply – Forest degradation has caused:

Because upstream forests, wetlands and other “natural infrastructure” play critical roles in:

The Beginning of a Beautiful Relationship if climate change doesn’t spoil the fungal communication between these two infant trees, imbedded in the furry fungal networks surrounding their roots. Source www.nature.com

OO Clearcutting, Climate Change Can Disrupt
Critical Networks Among Forest Trees – trees use a network of soil fungi to communicate their needs and aid neighboring plants. A network vulnerable to disruption. Among trees, these fungal networks:

Soil fungi are underground traders, exploring and harvesting nutrients and water that they trade with plants for sugar or other photosynthetic products.

When we harm forests, we harm ourselves.

OO Hottest Temperature Ever Measured In September For Europe – with a record high of 114.3 F in Spain, and amazingly hot Kuwait recently clocked in at 124.2 F, which would be the second hottest September temperature ever recorded worldwide.

@@ Weather, or Climate Change? An excellent short on the intersection of climate change with the weather, from the best experts in the field today.

Follow the Dotted Line … go to the webpage for the full sequence, a looong timeline scroll. Credit xkcd.com (Randall Munroe)

Love how the comment “[After setting your car on fire], Listen, your car’s temperature has changed before.” follows my cursor as it explores the timeline. And then comes the very real punchline:

@@ A Timeline of Earth’s Average Temperature – love it, love it, LOVE IT! Gives you a great sense of where we’ve been, and headed, temperature-wise, touched with humor along the way.

If you’re a stickler for prehistory and nitty gritty analytical details, you might get miffed, but he’s nailed the general picture. No room for the entire scroll here, so check it out!

@@ A Simple And Smart Way To Fix Climate Change given by Dan Miller in 2014 at a Ted talk suggests a way to profit as we tackle climate change, by finally charging those who sell and use fossil fuels – and distributing the revenues back to all of us.

The strategy is sure to speed transition to clean renewable energy. What’s not to like? Check it out!

OO Smoke Signals: Teasing Out Adverse Health Effects Of Wildfire Emissions that can include a range of smoky harmful pollutants.

OO New York City: Flooding Of Coast, Caused By Global Warming, Has Already Begun – huge vertical rulers are sprouting beside low spots in the streets here, so people can judge if the tidal floods that increasingly inundate their roads are too deep to drive through.

OO Connecticut Fishermen Struggle To Hang On – As climate changes, so do fish populations, but not the rules for catching them.

Her Land, Her Future

OO Dakota Pipeline Was Approved By Army Corps
Over Objections Of 3 Fed Agencies including the EPA, which echoed Sioux tribe’s concerns.

OO Insurers Call On Top 20 Global Economies
To Phase Out Fossil Fuel Subsidies By 2020 – at the recent G20 meeting. The insurers have $1.2 trillion under management.

*such as feeding the hungry and visiting the sick.

OO Pope Urges Christians To Save Planet From ‘Debris, Desolation And Filth’ with concerted action against environmental degradation and climate change. Consumerism and financial greed, he said, were threatening the planet. How about too many people?