Eco-warriors to the rescue 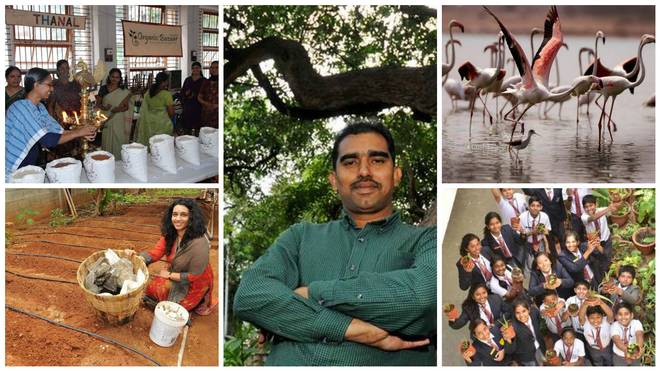 A school for gardening

If you thought kids hated vegetables, you must meet this lot. They love them because they grow them. The sprawling 14-acre campus of Bangalore’s Army Public School on Kamaraj Road is home to an ever-expanding school farm and garden, where you’ll find produce ranging from gooseberries and carrots to aloe vera, papaya and mint.

Rectangular plots of dark soil at the school’s entrance hold the promise of spinach, chillies, brinjal and radish. Then there are little patches of herb gardens growing lemongrass, mint, brahmi, rosemary, etc. The campus already has abundant trees planted over the years that yield lemon, chikoo, moringa, and curry leaves.

The school decided to set up a community garden, Greendom, as part of The School Enterprise Challenge — an international awards programme for schools, that encourages them to set up businesses. A beginning was made during Van Mahotsav in July, where every child donated one plant or sapling. A sale of these helped raise seed money for the project; a part was donated to charity. They have had two sales so far, which have helped raise Rs. 32,000. A part of it is ploughed back into the garden.

Principal Manjula Raman hopes to convert the school into a green zone and create awareness among children on the effort that goes into growing food. The school gardener and teachers are the go-to people to learn about plant care. Dry leaves and food waste are made into compost on campus. Many children take the plants home to care for them. And at school, the students weed, water and tend to them.

Bengaluru has been making every effort to turn over a new leaf — to erase the Garbage City tag, rekindle the Garden City spirit, and prove to the world that the city is ruled by green thumbs.

It is after all a city where people take pride in growing brinjals in pots on their sixth floor balcony, re-creating personal forests around their bungalows in Whitefield, where techies during the week turn farmers over weekends to form farming cooperatives and communities with friends.

The Oota From Your Thota (OFYT) urban organic gardening initiative of Garden City Farmers, is perhaps one of the most enthusiastic coming together of people; and it was so this year too, with new young tech-savvy initiatives added to the city’s passionate desire to grow their own food.

Many tree/sapling plantation drives like Trees For Free that distributes free saplings, voluntary groups like Say Trees that do Miyawaki plantation drives over the weekend or Afforestt, that uses the Miyawaki method to prepare urban forests in your backyard at a cost – the city has seen them all thriving. Harvesting Love, an initiative of Feed your Neighbour brought in the charity angle to growing food – growing three pots of greens in your home and donating crops to to feed the needy in the city. Apartment communities and Resident Welfare Associations have been able to strike a balance, on one hand creating awareness on waste separation and management, and on the other, composting and furthering the green cover in their localities.

Fauna returns to the lake

Early this year, members of Telangana State Special Protection Force (TSSPF), Hyderabad Birding Pals (HBP) and Friends of Flora and Fauna Society (FoFF) gathered at Ameenpur lake, a favourite spot for bird lovers. Their task was to clean up the lake precincts.

The lake has now been adopted by TSSPF Training Academy.

Encroachments, illegal borewells, use of dried patches in the upper reaches of the lake as motorcycle and car tracks, running of power lines, sand and granite quarrying, and scaring of birds with fire crackers threatened the lake’s biodiversity.

“The only way out was to clean up the lake environs. TSSPF men, who are deployed to guard and secure strategic installations and entities, had to be motivated to forego some of their holidays to remove the litter,” says Tejdeep.

They soon joined volunteers of HBP and FoFF, cleaned the surroundings and educated apartment dwellers, temple authorities and villagers.

A team from the State’s Fisheries Department conducted an orientation on safe fishing methods, villagers were urged to stop dumping trash and immersing Ganesh idols, illegal borewells were shut down.

“Ameenpur lake is not an irrigation project, but there is a proposal to bring the lake under Mission Kakatiya, the State’s flagship project to save water bodies,” says Tejdeep.

Ameenpur lake was recognised as a Biodiversity Heritage Site in November. This, Tejdeep hopes, will help in further protecting the lake.