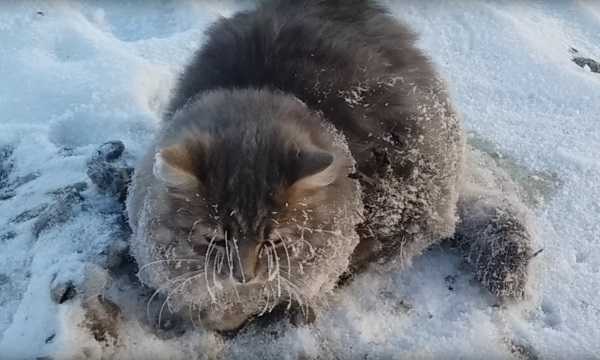 A cat sheltering under a parked car on a cold Russian winter night was saved from the pavement’s icy grip by the milk, er, warm water of human kindness.

Russia is famous (infamous, actually) for its long and frigid winters… just ask Napoleon. Naturally, creatures living in the world’s largest country have learned to be creative when it comes to keeping warm on chill winter nights. Take a certain stray cat from Zlatoust, near Chelyabinsk in the southern Ural mountains, who figured he’d lucked out when a car pulled into a parking space early one evening. Voila, instant heated resting place! And so it was… for a while.

What cats don’t know, however, is that newly parked cars cool off as time goes by. Given enough time (say, overnight), and both a sheltering cat and the melted slush it’s resting in tend to become one. In the morning, the car’s driver pulled out of his spot leaving behind one very bewildered cat… you would be too, if your paws were stuck to the pavement via refrozen snow and ice.

The situation had all the makings of a tragedy: an immobile cat in full view of any passing predator. Not to mention the good odds of another car pulling into the parking space at any time. Luck smiled down on the unfortunate feline, however, as the first creatures to…