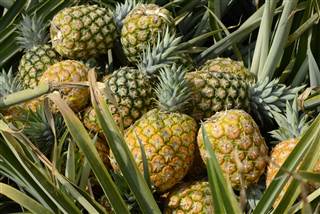 A strain of pineapple genetically engineered to be pink instead of yellow got the go-ahead from the U.S. Food and Drug Administration on Wednesday.

The pink pineapple, made by Del Monte Fresh Produce, simply has some genes toned down to keep the flesh of the fruit pinker and sweeter, the FDA said.

“(Del Monte) submitted information to the agency to demonstrate that the pink flesh pineapple is as safe and nutritious as its conventional counterparts,” the FDA said.

“(Del Monte’s) new pineapple has been genetically engineered to produce lower levels of the enzymes already in conventional pineapple that convert the pink pigment lycopene to the yellow pigment beta carotene. Lycopene is the pigment that makes tomatoes red and watermelons pink, so it is commonly and safely consumed.”