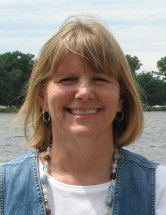 What comes to mind when you hear the word cranberry – a small red berry with a tart, tangy flavor, the jellied cranberry sauce served at Thanksgiving, or the Ocean Spray commercials on television?

Cranberries (Vaccinium macrocarpon) are a native plant, a “super fruit,” and have a rich history in Wisconsin. Here, commercial production began about 1860 near Berlin, and today many growers are the fourth and fifth generation on the same farms. Wisconsin has the ideal landscape and weather for growing cranberries. Since 1995 we have been the nation’s leading producer of cranberries, producing nearly 60 percent of the crop.

The cranberry was a staple of Native Americans’ diets as early as 1550. Cranberries were eaten fresh, used in cooking, as a preservative, as medicine, and for dyeing fabric. The Pilgrims learned how to use cranberries from the Native Americans. The early colonists called the fruit “crane berry,” as the flower of the plant resembled the head and neck of a crane.

Cranberries naturally grow in acid bogs or marshlands, generally an area where no other crop can be grown, the soil pH is usually between 4.0 and 5.5. Cranberry bog soil is unique in that it consists of alternating layers of sand and organic matter. Cranberries do not grow under water or in standing water, they need a moist but well-drained soil for proper root growth and function.

The cranberry plant is a low-growing, trailing woody evergreen vine that produces stems or runners from one to six feet long. The leaves are tiny and oblong in shape. In Wisconsin, cranberries flower in late June and early July. Berries start to develop after pollination and will change in color from green, to white, to dark red at maturity.

Cranberries are self-fruitful, meaning the pollen from a flower…