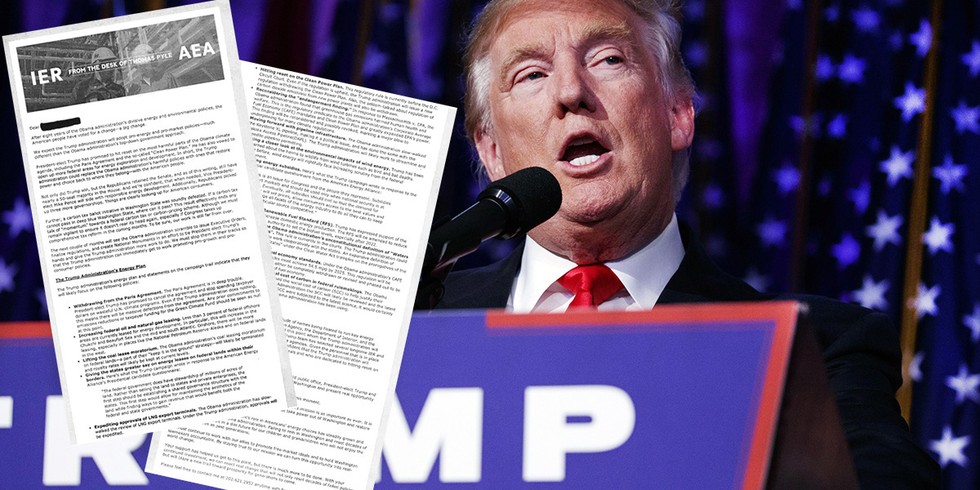 President-elect Donald Trump is set to gut U.S. environmental regulations, open up federal lands for fossil fuel extraction and quit the Paris climate agreement, according to documents seen by Energydesk.

A memo penned by Thomas Pyle, head of the Department of Energy transition team, and obtained by the Center for Media and Democracy, lists 14 key energy and environment policies the incoming Trump administration is expected to enact.

The note—part analysis of Trump’s statements, part fossil fuel industry wish list—was sent on Nov. 15, just days before Pyle was brought on board by the Trump team.

It appears to reflect what Pyle wants from a future Trump administration—though little has yet emerged by way of formal energy policy.

Pyle is president of the Institute for Energy Research and the American Energy Alliance, which count among their major donors ExxonMobil, Peabody Energy and Koch Industries. He was also a top lobbyist for Koch Industries between 2001 and 2004.

The letter—”from the desk of Thomas Pyle”—celebrates the Republican party victory in last month’s election, excitedly claiming that Trump will adopt what he describes as “pro-energy” and “pro-market” policies.

That’s good news for oil, gas and coal which—if Trump does end up enacting this agenda—will be free to mine and drill under federal lands from…