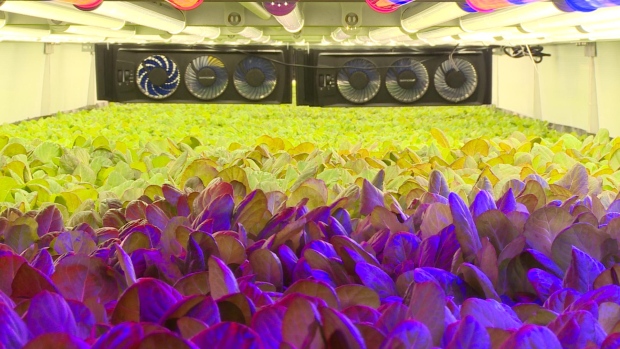 Steven D’Souza is a Gemini-nominated journalist based in New York City. He has reported internationally from the papal conclave in Rome and the World Cup in Brazil, and he spent eight years in Toronto covering stories like the G20 protests and the Rob Ford crack video scandal.

Inside a windowless warehouse once used for paintball, with planes heading to nearby Newark airport overhead, an industrial park in New Jersey seems an unlikely place to find fresh locally grown produce.

With LED lights standing in for the sun, and cloth replacing soil, the plants grown at AeroFarms are not your typical greens.

“This is fully controlled agriculture and allows us to understand plant biology in ways that, as humans, we’ve never achieved,” said AeroFarms CEO and co-founder David Rosenberg, standing in front of rows of kale, arugula, lettuce and other leafy greens.

This is a vertical farm — a facility that looks like it jumped off the page of a science-fiction novel instead of an agriculture textbook.

Here seeds are woven into a mesh cloth made of recycled materials. Trays of plants are stacked one on top of the other in long rows. LED lamps provide the light, while water and nutrients are sprayed in a mist to the roots as they dangle below — a process called aeroponics.

The company is currently building what’s been described as the world’s largest industrial vertical farm, with food grown 12 levels high inside a two-million-square-foot space, which the company says will produce two million pounds of food a year. It’s set to open next year.

The pitch is enticing: locally grown food in any climate, year-round. In AeroFarms’ case, they say they use 95 per cent less water, no pesticides and don’t produce any of the waste that comes with industrial agriculture.