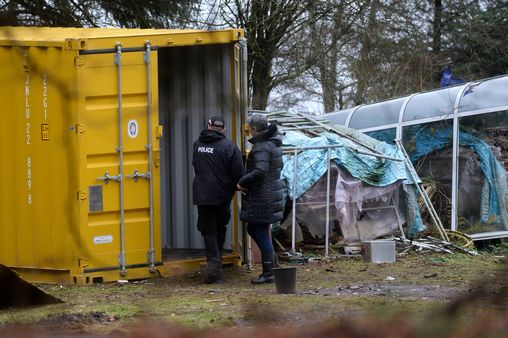 Police are digging up the garden at the home of a missing woman, who they fear has come to harm after “not seeing anyone but her carers in 17 years”.

Margaret Fleming, 36, was reported missing on October 18 by her carers Edward Cairney, 75, and his partner Avril Jones, 56.

Police believe she hasn’t been in contact with anyone else since 1999, when she last saw her family at a party.

Police Scotland’s Major Investigations Team, who usually deal with the most serious crimes including murder, have been called in to assist local officers.

Edward and Avril took in Margaret, 36, who has learning difficulties, when she became estranged from her family in the 1990s. She moved into their home in Inverkip, Renfrewshire.

The couple reported her missing on October 28 this year and police began piecing together her life.

The inquiry has so far failed to find any evidence that anyone other than Edward and Avril has seen her for 17 years.

Detective Chief Inspector Paul Livingstone, leading the investigation, said yesterday: “Apart from her carers, the last independent sighting of Margaret was in 1999.

“This, along with facts such as having no trace of a job, few friends that are contactable and no evidence of her contact with partner agencies and local services, has led me to become very concerned for her whereabouts and wellbeing.

“One line of inquiry I now must consider is the possibility that Margaret may have come to some harm.

“It’s important that we keep an open mind to all lines of inquiry, but the distinct lack of information about Margaret is concerning.”