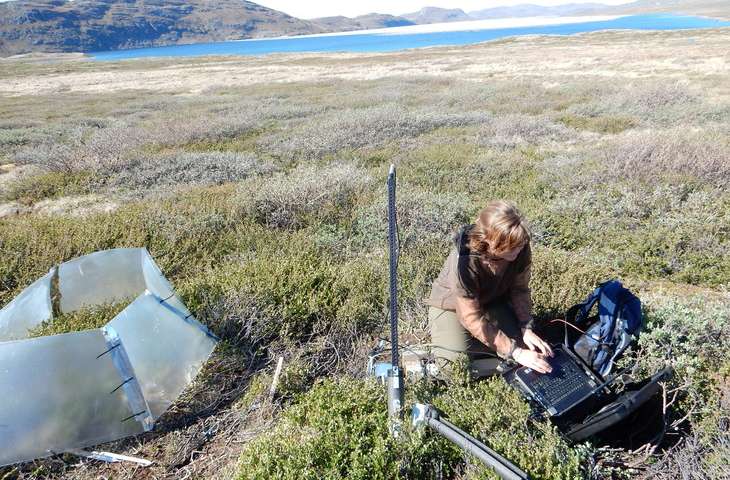 It’s a long way between central Pennsylvania and Greenland—at least 2,000 miles—but Laura Radville came to Penn State so she could study climate change in the “Iceberg capital of the world.”

However, the research conducted in Greenland by the Boston native did not deal with ice at all, but rather plants—arctic shrubs to be specific. Her work focused on how rising air temperatures are affecting the growth of leaves and stems much more than the growth of roots, perhaps “uncoupling” aboveground and belowground plant development, or phenology.

“The College of Agricultural Sciences at Penn State has been sending faculty and students to Greenland to conduct research for years, and I wanted to go to study climate change because it’s a huge issue,” said Radville, a doctoral candidate in ecology. “This was an especially cool project because I got to go onto the tundra.”

Shifts in plant-growth patterns have been widely reported in response to global warming, and it is well documented that warming generally advances aboveground plant growth, noted Radville, who is advised by David Eissenstat, professor of woody plant physiology. But warming’s influence on root phenology is unclear.

Most terrestrial biosphere models assume that root and shoot growth occur at the same time and are influenced by warming in the same manner, but recent studies suggest that this is not the case. Testing this assumption is particularly important in the Arctic, Radville pointed out, where more than 70 percent of plant biomass can be belowground and warming is happening faster than in other ecosystems.

In a paper published in Climate Change Responses early this year, Radville reported that peak root growth occurred two and a half…