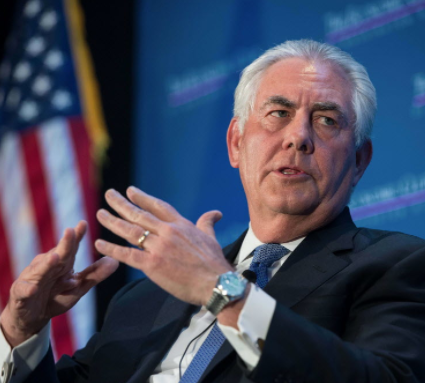 From the Tuesday Morning Jolt:

What do you know about Secretary of State nominee Rex Tillerson based upon the coverage of him so far? Probably just that he’s head of Exxon and he’s close to Vladimir Putin, right? He once was given the Order of Friendship decoration by Putin.

Would you have expected for Tillerson to first be recommended to Trump by… former Defense Secretary Robert Gates?

Would you have expected for the recommendation to be strongly endorsed by… former Secretary of State Condi Rice?

Rex Tillerson is an excellent choice for Secretary of State. He will bring to the post remarkable and broad international experience; a deep understanding of the global economy; and a belief in America’s special role in the world.

I know Rex as a successful business man and a patriot. He will represent the interests and the values of the United States with resolve and commitment. And he will lead the exceptional men and women of the State Department with respect and dedication.

I look forward to supporting Rex through the confirmation process and then welcoming him to the family of Secretaries of State.

Would you have expected former Vice President Dick Cheney to support the selection?

Kind of an unusual fan base for a guy who’s supposed to be a puppet of Putin, isn’t it?