Syngenta takes Commission to court over ban of bee-killing pesticide 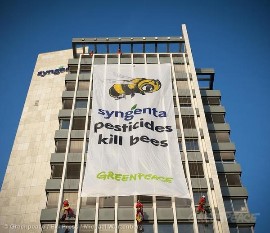 [UPDATE] – At least one other agrochemicals company (Bayer) has joined Syngenta in challenging the EU pesticide ban.

Brussels – Swiss agrochemicals company Syngenta has legally challenged a partial EU ban of one of its pesticides that has been shown to kill bees [1]. The Syngenta complaint [2] was reported in the media on Tuesday, although it was filed with the European Court of Justice on 14 August. Court proceedings in such cases are likely to take around two years.

Reacting to the news, Greenpeace spokesperson Mark Breddy said: “Syngenta continues to ignore scientific evidence that clearly links thiamethoxam and other pesticides to bee-mortality. Instead of taking the Commission to court, it should act responsibly and stop marketing its bee-killing pesticides. The Commission was right to intervene and Greenpeace will continue to campaign actively for the protection of bees. The environmental risks and the threat to agricultural production posed by these pesticides far outweigh any benefits.”

Neonicotinoids are powerful pesticides that damage the nervous systems of bees and other pollinators [3]. Other pesticides produced by Syngenta and other agrochemicals companies pose a severe threat…