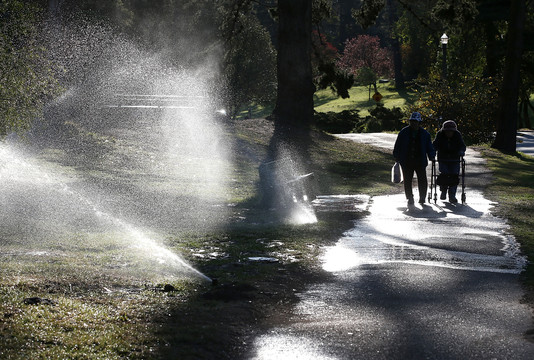 IN LESS THAN a month, the United States will be led by a president who denies climate change exists. President-elect Donald Trump has also said he wants to see the U.S. withdraw from the Paris Agreement and wants to roll back environmental regulations.

In California, a state that has already seen the impacts of climate change and has been a leader when it comes to efforts to slow its pace and mitigate its results, many are wondering what the new direction on the federal level will mean for the state.

Tara Lohan: Juliet, given the current anti-science political climate right now, as a climate scientist, how are you feeling and what are some of the folks in your community thinking?

Juliet Christian-Smith: It’s been a difficult month or so, but I’m happy to be in California. A meeting of the American Geophysical Union took place this past week – it’s the largest scientific conference in the United States – and it was a great moment for scientists to come together, share research and stand up for the value of science. Gov. [Jerry] Brown came and said during his talk that climate science will persevere and that California is doubling down on its efforts to show the rest of the country and the world how to fight emissions, address global warming and have a thriving economy.

While we’ll be facing some real challenges at a federal level, we hope that a call to science and integrity and the will to preserve in our commitment to the country will win in the end. We put together a letter signed by over 2,000 scientists, including more than 20 Nobel Laureates, asking the Trump administration to implement rules around scientific integrity so that even if the appointees don’t understand the science, they’re listening to the scientists who actually do the science and understand it.

Lohan: Max, from your perspective, what can the state do to help support climate science and scientists?

Max Gomberg: California has been a leader on climate change issues since 2006, when it passed AB32, or the California Global Warming Solutions Act, and it is maintaining its leadership role. Last year, we passed SB32, which tries to reduce emissions even further to a sustainable level to avoid catastrophic effects like massive sea-level rise, temperature change and dramatic changes in ecosystems.

The state has played a really critical role in our national negotiations leading to the Paris agreement last year. There’s a lot of work going on to continue both mitigation of climate change and to adapting to the changes that we’re already seeing. There’s a lot going on in California in the climate realm. That’s going to continue no matter what happens in Washington D.C.

Lohan: California currently has the most ambitious greenhouse gas targets in the country. Can anti-science action at the federal level put that in jeopardy?

Gomberg: Certainly. In the past, the state has been granted waivers to go above and beyond federal legislation. For example, California took the lead in setting higher fuel efficiency standards for vehicles, and a number of states later followed. If there’s federal action to try to roll back those allowances for the states, that could hamper some of our work. On the other hand, ideological conservatives in Congress are fond of promulgating the idea that the federal government should leave decisions up to the states, so they might find themselves in a quandary there.

Lohan: Taking a step back, what do we actually know about California’s climate in the past, and what should we expect in the future?

Christian-Smith: We know that we’re already experiencing climate change. It’s not something that is going to happen later; it’s happening now, and it will get worse.

The statewide average temperature in winter is already more than 5 degrees [fahrenheit] (2.8C) warmer than it was historically. In 2015, for the first time ever in recorded history, temperatures in the Sierra Nevada were above freezing during the winter time. That’s a big problem for a state with a water system that is heavily counting on snowmelt. A third of our water comes from snowpack that melts into some of the major reservoirs that were created by the state and federal government in the 1950s. Those projects are seeing huge reductions in the amount of snow and they’re also seeing big changes in the timing of snowmelt. The peak snowmelt events occur now 30 days earlier than average. The timing of water supply is out of phase with the timing of water demand and that’s a problem for management.

Because of the system of traditional surface waters – lakes, rivers, reservoirs – is failing, we have seen a huge shift toward relying on groundwater.

Lohan: Max, the state is already working toward sustainability on groundwater. In 2014, California passed the Sustainable Groundwater Management Act. Its implementation has begun and will continue for quite some time. What else can water managers be doing except for relying on groundwater to plan for changes…