Trump Rejects Climate Change, but Mar-a-Lago Could Be Lost to the Sea 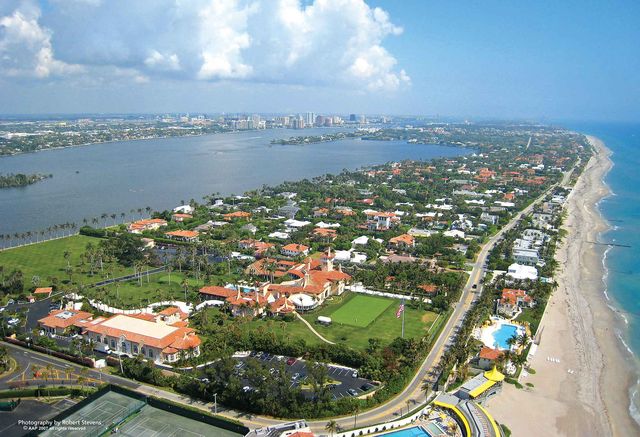 Donald Trump shelled out $409,759 for property taxes in 2016 on Mar-a-Lago, his oceanfront club above billionaire’s row in Palm Beach, Fla. Some of those tax dollars will go toward combating the ravages of climate change, a phenomenon the president-elect has dismissed as a hoax. Trump tweeted in 2012 that “the concept of global warming was created by and for the Chinese” to make U.S. industry less competitive. In early December he told Fox News that “nobody really knows” whether climate change is real. He’s picked Oklahoma Attorney General Scott Pruitt, a staunch denier of climate change, to run the U.S. Environmental Protection Agency.

That’s not stopping officials in Palm Beach from preparing to deal with its effects. This year, the town overhauled 12 pumping stations to push storm runoff up a huge pipe to the Intracoastal Waterway under a 20-year, $120 million infrastructure plan to deal with increased rainfall and street flooding, among other issues. Palm Beach’s system can now suck up almost 1 million gallons of runoff a minute. “I just deal with the reality that sea levels are rising,” says Palm Beach Town Manager Thomas Bradford. “I don’t want to rile people up about it.”

A bike path along the Intracoastal Waterway floods when the full moon and high seas cause so-called king tides, which have grown more intense. Brackish water bubbles out of the ground, forced up by pressure on the water table from rising sea levels. According to Palm Beach County’s online climate-change mapping tool, the back quarter or so of Mar-a-Lago’s verdant, palm-tree-lined grounds would flood if sea levels rise two to three feet. The town recently changed the construction code to require higher seawalls around…