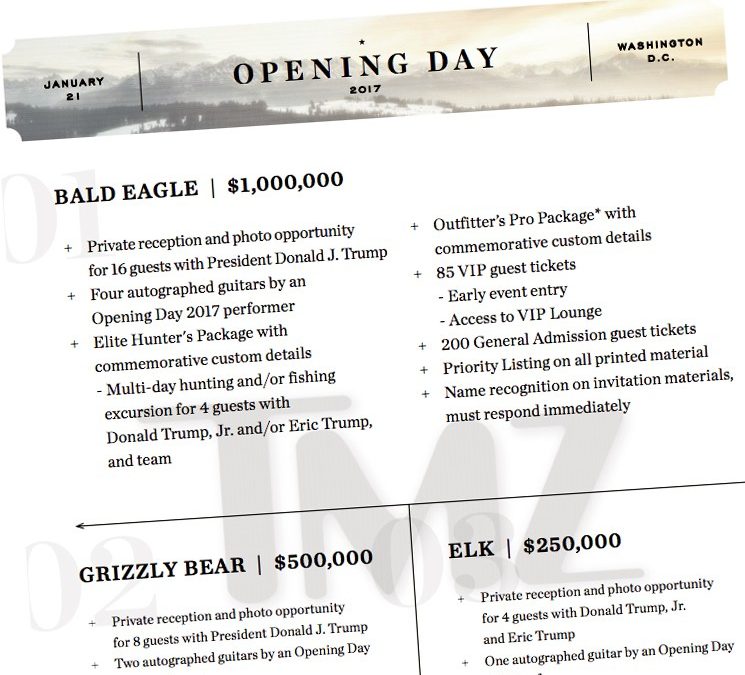 So much for separating business and politics. A Texas nonprofit co-chaired by notorious hunting enthusiasts Donald Jr. and Eric Trump will be hosting a wildlife-themed event to celebrate their father’s incoming presidency. Donors who drop between $500,000 to $1 million will be entered for a chance to win multi-day hunting and/or fishing trips with the Trumps—all in the name of “conservation.”

TMZ posted a copy of the invitation of the “Opening Day 2017” fundraiser with the dress code “Camouflage and Cufflinks.” It will take place at the Walter E. Washington Convention Center in Washington, DC on Jan. 21, a day after Donald Trump’s presidential inauguration.

According to the invitation, donors who donate $1 million for the “Bald Eagle” package will have a chance to win a private reception and photo opportunity with the President-elect, as well as a multi-day hunting and/or fishing excursion with Donald Trump. Jr. and/or Eric Trump, among other glitzy prizes. For $500,000, the “Grizzly bear” package offers a scaled down version of the hunting trip.

The event will “celebrate the great American tradition of outdoor sporting, shooting, fishing and conservation,” the brochure states.

“This celebration, independent from official inaugural events sponsored by the Presidential Inaugural Committee, is in support of conservation organizations all over our beautiful country. All net proceeds from this private event will be donated to support conservation efforts,” Kinzie said.

Trump’s sons are known hunting aficionados, and have been criticized by animal rights’ groups for posing in photos with their exotic and endangered big game catches such as elephants and leopards.

PETA president Ingrid Newkirk released a statement to the website Gossip Cop in response to the event.

“A few years ago, Donald Trump said that he was ‘not a believer in hunting’ and was ‘surprised’ that his sons liked it,” she stated. “He spoke out against fishing, too, and also helped PETA by getting the ‘diving mule’…