DAPL, Indigenous Rights and Environmental Justice: The Watershed That Was 2016 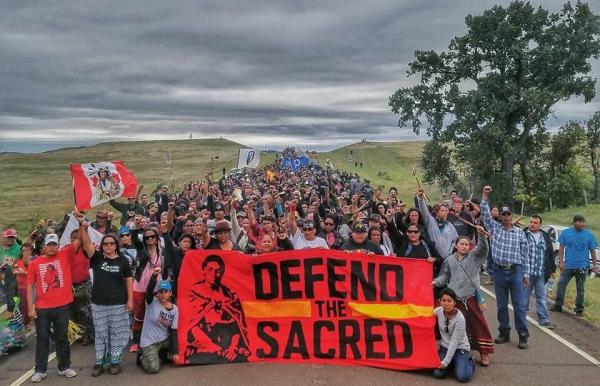 It almost goes without saying that THE environmental story of 2016 was the standoff over the routing of the Dakota Access Pipeline (DAPL). The year was bookended by the DAPL resistance camps starting in the spring, and ending with the designation of Bears Ears National Monument—both stemming from Native-driven efforts. Beyond the environmental implications, however, the DAPL conflict brought indigenous Treaty rights to the fore, illuminated the abhorrent treatment of Native Americans since European contact, and demonstrated the lengths to which big business will go to get its way—even if it means perpetrating these acts on U.S. citizens.

In between these two milestones were any number of other success stories, from the Lummi victory over the Cherry Point coal terminal, to the designation of the beloved bison as the country’s national mammal. The list below covers the major points of the DAPL chronicle, followed by the other big environmental stories, some of which may have been missed the first time around amid the urgency of DAPL.

Though the pipeline was initially proposed—and objected to—in 2014, it wended its way piecemeal through various regulatory agencies in four states until July 2016, when the last state permits were granted. On April 1, Standing Rock Sioux tribal member LaDonna Brave Bull Allard began hosting about 25 to 30 people on land alongside the Cannonball River. When construction began across sacred, treaty-protected lands in August, people started pouring in, and the numbers soon swelled to hundreds, then thousands, of water protectors.

San Carlos Apache Tribe council member Wendsler Nosie Sr. embraces Standing Rock Sioux Tribe David Archambault II at the Camp of the Sacred Stones near the Standing Rock reservation, where Nosie came to offer support and prayers to those taking a stand against the Dakota Access oil pipeline. The Apache Stronghold has been fighting for more than a decade to stop the takeover of sacred Oak Flat for copper mining by Rio Tinto.

This included representatives from nearly 300 tribes whose leaders sent supplies, visited in person or both. Support became especially keen after it came out that the pipeline had originally been slated to run north of Bismarck, but that objections over possible danger to the mostly non-Native city’s drinking water had pushed the route farther south—to within a half mile of the Standing Rock Sioux Reservation. As protests mounted, the arrests began, and later the violence, from an increasingly militarized police force.

It wasn’t just tribal members who did not want the routing underneath the Missouri River at Lake Oahe, the source of drinking water for the Standing Rock Sioux and millions of others downstream. Three federal agencies—the U.S. Environmental Protection Agency (EPA), the U.S. Department of Interior (DOI) and the Advisory Council on Historic Preservation—stepped into the public fray over the $3.8 billion, 1,172-mile-long pipeline and said it needed much more environmental and archaeological review. Three arms of the United Nations also weighed in, condemning the enforcement, the pipeline and the breaching of treaty rights, and the world began to pay attention. Amnesty International also spoke out against treatment of the water protectors. Numerous celebrities also came on board, most notably Shailene Woodley, who spent weeks at the camps and hosted Thanksgiving dinner along with Jane Fonda, who donated seven butchered bison and served food for 500 water protectors at Standing Rock. Woodley spoke exclusively to ICTMN about how to be an indigenous ally, and Jackson Browne and Bonnie Raitt gave a concert the same weekend.

Pressure mounted against the administration of President Barack Obama until finally, in mid-December, history was made as the U.S. Department of the Army declined to issue the one last easement that Energy Transfer Partners required to drill under Lake Oahe, officially stalling the project. With winter setting in, Standing Rock Sioux Chairman David Archambault II told the water protectors that it was time to go home. Some folks stayed, but many saw the wisdom of the request given the blizzard conditions, and the fight began…