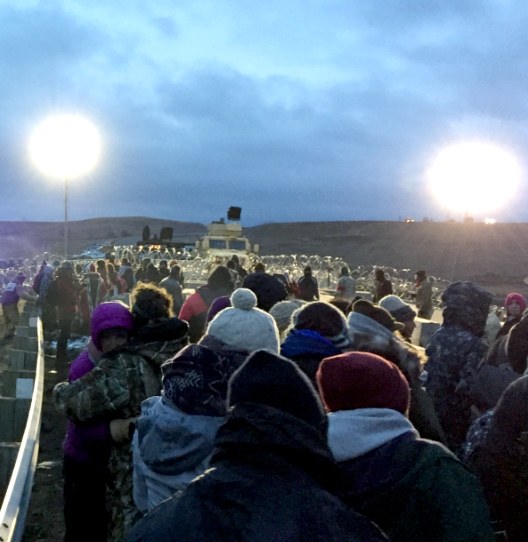 A thousand-year-old Lakota prophecy tells of a Black Snake that would one day rise from the deep and move across the land bringing destruction and great sorrow. The Sioux believe that the Black Snake has arrived in the form of the Dakota Access Pipeline and the most powerful economic and political force in the world—the fossil fuel industry.

Not long after our group of travelers arrived at the Standing Rock Sioux Reservation in North Dakota for a weeklong stay at the native-owned casino hotel, we began to meet Water Protectors, who were suffering from a police attack a few days before our arrival.

From home I had watched the horrifying scene on live stream. Blocked from escape, hundreds of unarmed Water Protectors on the bridge across the Cannonball River were blasted with water cannons for six hours in sub-freezing temperatures. I could see clouds of tear gas and hear people screaming and calling for a medic as the cameraman expressed disbelief that this was happening to unarmed civilians. Later we got the full report that exploding percussion grenades had severely damaged a native woman’s eye and blown off most of the arm of a 21-year-old woman from New York. Several hundred were hospitalized for hyperthermia and injuries. In earlier confrontations, non-violent Water Protectors defending sacred sites from bulldozers were beaten with batons, bitten by vicious dogs, arrested, stripped searched and locked up for days in jail cells or held in dehumanizing dog kennels.

Now we were meeting victims first hand. The native-led Water Protectors, as they call themselves, rather than protestors, are living in nearby encampments to defend the land, water and sacred sites of the Sioux. There is no running water in the camps, so as other hotel guests were doing, we offered our rooms for hot showers. A young native man still covered with tear gas residue sprayed on him three days earlier, was suffering from a deep cough. Another had a broken hand. A native woman who worked on camp security fell asleep from exhaustion on one of our beds. Before taking his shower, a non-native ally who served as a medic showed us a blue colored rubber bullet about the size of a golf ball, one of many that had lacerated heads, broken bones and knocked people unconscious, including an elder. The medic had been thrown backward when he was hit squarely in the chest. He thought that surely, the large red cross he wore on the front of his jacket had been used as a target.

When I first caught sight of the law enforcement officers a few days later, I felt a chill. Dozens of helmeted policeman stood in a row along the high ridge of Turtle Island, a place of ancient burial sites sacred to the Sioux. Dark figures silhouetted against the sky loomed menacingly above the peaceful protestors gathered at the base of the hill holding a large banner reading Indigenous Sovereignty Protects Water. Behind them along the banks of the Cannonball River sprawled an encampment of teepees, tents, yurts, trailers, horse corrals and old school buses. Guarding the bridge where the recent attack had taken place, another row of police officers in riot gear wearing black helmets with face guards held bully sticks across their bullet proof vests as they stood behind shining coils of razor wire and concrete barriers flanked by armored vehicles.

These armed forces were protecting what lay out of view behind them—the construction of the oil pipeline headed toward the nearby Missouri River. The original route of the pipeline had run to the north near the city of Bismarck, a largely white community that had insisted the pipeline be rerouted down stream to cross the river next to the Sioux reservation. If successful the $3.8 billion Dakota Access Pipeline (DAPL) would bore under the river, threatening the source of drinking water for the reservation and millions downstream in its mission to carry 20 million gallons a day of crude oil fracked from the Bakken oil fields. With the frequency of oil spills increasing, including two major recent spills in North Dakota, the danger is real. If the pipeline does succeed in bringing the oil to market, it will produce the carbons equivalent to 30 coal power plants every year for 20 years or more.

Mni Wiconi—Water is Life— is the call from Oceti Sakowin (Seven Council Fires), the largest of several camps at Standing Rock, named for the seven tribes of the Sioux nation, which include the Lakota. Located next to the reservation and preserved for indigenous use under the 1851 Treaty of Laramie, this land was never ceded by the Sioux. Oceti Sakowin and the first camp called Sacred Stone were started in the spring of 2016, and joined by several other encampments, all run by volunteers. Non-violent and spiritually centered, the Standing Rock movement honors the sacredness of the natural world. Throughout the camps Defend the Sacred is printed on banners and on t-shirts proudly worn by native teenagers. All seven tribes of the great Sioux Nation, some former enemies, have joined together at Oceti Sakowin for the first time since Little Big Horn. Along the camp’s main road wave the colorful flags of some 300 tribes who have journeyed across the Americas, from Argentina to Alaska, bringing traditional dress, ceremonial pipes and drums to join the Sioux in the largest gathering of Native Americans in recorded history.

In support of this native-led movement tens of thousands of non-native allies have joined the camps swelling them at one point to as many as 10,000. Many more have visited to bring supplies and resources to support Standing Rock. Our group of 35 traveled to North Dakota to cook and serve 2,000 dinners on Thanksgiving to express our gratitude to Native Americans for protecting Mother Earth, as they have throughout history. The Wopila (thank you) Brigade, as we called ourselves, spent two days at the Standing Rock Community High School kitchen, preparing the dinner, which we served in the school gymnasium, as well as distributed in the camps. Our brigade worked hand-in-hand with the school staff, who brushed away tears when they thanked us for coming, explaining that for so long the native community had felt unseen and forgotten.

Our dinner began with a prayer by elder Jesse Taken Alive who had given a Lakota name to the event that translates Because We Believe Them, We Are Feeding Them. In continuous loops from the camps, the Water Protectors arrived in school buses and were offered hot showers in the locker rooms before heading to the buffet. Jane Fonda appeared and asked me how she could help. “How about dishing out the mashed potatoes,” I suggested, which she happily did. With their plates heaping with turkey, potatoes and gravy, and an array of vegetable dishes, our guests made their way to the gymnasium to take seats at long banquet tables we had covered in the Sioux colors of the four directions – red, yellow, black and white. Displayed on the tables and along one wall were colorful thank you cards made by Philadelphia area school children…