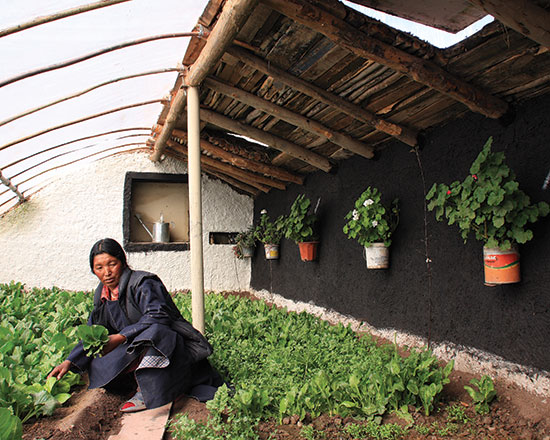 Typical glass greenhouses require massive inputs of energy to grow crops out of season. That’s because glass, even if it’s triple-glazed, loses much more heat than an insulated wall. But with some thoughtful design, growing fruits and vegetables out of season can be accomplished by using and storing the energy from the sun.

Contrary to its fully glazed counterpart, a passive solar greenhouse is designed to retain as much warmth as possible using thermal mass and insulation. These features make it possible to grow crops year-round with solar energy alone, even when it’s freezing outside, in regions where doing so would otherwise be impossible without large energy inputs. Solar greenhouses are especially successful in China, where many thousands of such structures have been built in recent decades.

The quest to grow warmth-loving crops in temperate regions initially didn’t involve any glass at all. In northwestern Europe, gardeners planted Mediterranean crops close to specially built walls with high thermal mass. These walls created a microclimate that could be 14 to 22 degrees Fahrenheit higher than the surrounding outside temperatures (learn more at

Low Tech Magazine). Later, greenhouses built against these walls further improved yields from solar energy alone. It was only at the very end of the 19th century that the greenhouse turned into a fully glazed and artificially heated structure where…