Garden of the week: A subtropical haven on Auckland’s North Shore 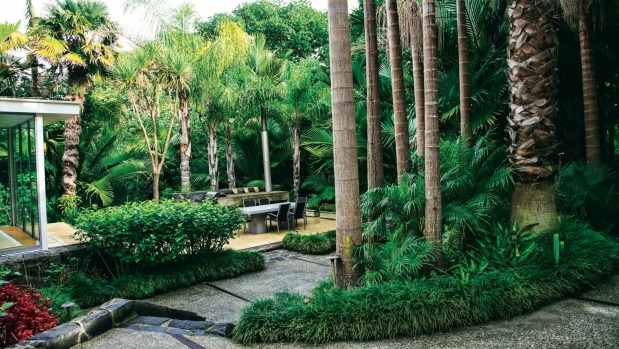 Gardens that create a sense of wonder are rare in our cities, where big houses and tiny outdoor spaces are increasingly the norm. But Rod and Lesley Slater’s garden on Auckland’s North Shore is such a place. When you open the gate you enter a verdant world where native birds flit between tall palms and kauri underplanted with bromeliads, ferns and other lush subtropicals. Floating timber steps link to boardwalks that flow down the slope towards a beach with views to Auckland city, or to the house and its outdoor terrace, which is surrounded by beautifully constructed stone walls.

The Slaters have owned this large property, covering two sections, for 15 years. “It still makes me smile,” Lesley says. “We hear the tui and wood pigeons all the time. It brings you into another world when you are walking through the trees here.

“I feel happy whenever I am out in the garden, even more so now our grandchildren are beginning to enjoy it. They were a bit terrified when they were younger. They called it the jungle. They wouldn’t go on the paths unless we were with them.”

But the twisting paths and boardwalks that once seemed too scary now take both adventurous grandchildren and appreciative grown-ups on a journey through groves of towering native kauri, palms and native broadleafs, some well over 100 years old.

A maze of old, criss-crossing paths was among the challenges faced by designer Bryan McDonald of Auckland Landscapes when he began working on the garden a few years before the Slaters bought the property. The original arts and crafts-style cottage had just been renovated for the previous owners to designs by Fearon Hay Architects and the site was a mess, he remembers.

“The network of old asphalt paths made access slippery so we replaced these with boardwalks that loop around the slope to make it more of a ‘stroll’ garden. We also had to merge the established areas of the garden with the bare clay surrounds of the new development.”

Not only did the designer have to fuse existing planting with the contemporary garden areas around the renovated house, he also had to integrate older built structures on the site, including many stone…