How to Grow Mediterranean Herbs in a Cold Climate 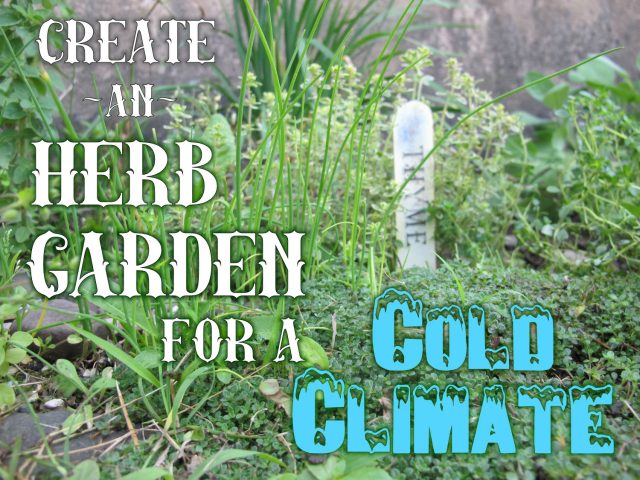 It all started with the rosemary. I had written a blog post quite some time ago, recommending ‘Salem’ rosemary as being particularly good for wintering over indoors–and yet I had never grown it myself. Since moving to our new house, I had been puzzling over a narrow strip of soil between the attached garage and a stone walk.

It got sun for three-quarters of the day and runoff from the garage roof. The hostas that the previous owners had planted there appreciated that runoff, but during the driest part of the summer, they really started to flag. I suppose a different gardener would water them all through the summer, but that’s not my style. I would rather find a place for the hostas where they are happy without the extra help from me. So then I asked myself,

What likes it hot and dry?

Answer: Perennial Mediterranean herbs! Specifically, rosemary, lavender, thyme, tarragon, oregano, and sage. After this light-bulb moment, I realized it was time to try ‘Salem’ rosemary. ‘Arp’ rosemary is reputedly the hardiest, but it just wasn’t that attractive of a plant, and it finally died on me. I was currently growing a nameless rosemary from a big box store. ‘Salem’ was not that easy to find, but I finally located it at The Grower’s Exchange. I contacted the owner, Briscoe White, to pick his brain about the hardiest rosemary.

Salem is a tried and true variety. It does not sell as well as other better known varieties, but I kept it on our list just because it is a very reliable rosemary. It would need winter wind protection in your climate. It can be kept indoors, but we always have recommended that they be taken from indoors after holiday season and kept in a cool room or cold frame to allow dormancy. Arp, I agree is a specialty variety. The very sparse needles look gray/green, they are not very fragrant. It has the reputation among gardeners to be the hardiest rosemary. This may be, but from my experience in Virginia, Salem is just as hardy, and is fine for culinary use.

I asked him if there were any other rosemarys he would recommend for wintering over.

As an indoor rosemary, Tuscan Blue is my long time favorite. It is not reliably hardy even here in Virginia. BUT, it has the largest and most dark green needles of any other rosemary. It is very aromatic and does well indoors. It is great for cooking. If you are committed to bringing in a potted rosemary inside every winter due to severe temps, hardiness is not a critical factor. Why not select for best foliage and fragrance? Tuscan Blue does require a cool dormant period, so a cool room with southern or western exposure would be perfect. Tuscan Blue’s foliage is beautiful, making plants useful for Xmas holiday decorating.

Rosemary is definitely not hardy in my climate; it will be grown in a pot. That was a given. But what about the other herbs? I had tried growing tarragon and sage before, and they hadn’t made it through the winter. A inexperienced cold climate gardener might think that the winter was too cold, but what I have learned over the years is that poor drainage will kill a lot of plants that would otherwise survive the cold just fine. They rot, and it’s usually mud season that gets them. Briscoe agreed. “Drainage is vital to herb plant health. Especially in winter.” The soil here is acid clay, and especially during snow melt it can be sodden.

It was the runoff from the drip edge that concerned me. It could provide too much moisture to the soil. But, considering my other options, this was still the best place to grow Mediterranean herbs in my garden. So, I tried to make the soil more freely draining by adding amendments.

The “other chicken grit” is made out of granite. One brand is called Grani-Grit. Both products are available at poultry supply stores, but usually not both at the same shop. In this case I wanted the oyster shells to offset the acidity of the soil. Most of these perennial herbs like a soil that leans toward alkaline.

Once I had spread all the chicken grit, I decided that wasn’t sufficient to improve the drainage. I availed myself of the surplus grit (or sand or gravel or whatever it’s called) used as the base for the front stone walk.