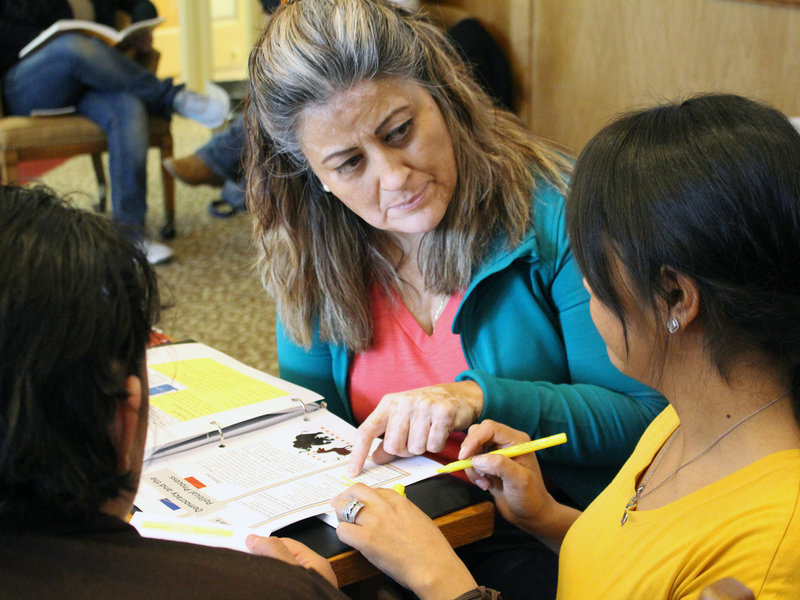 At the public library in the rural Morgan County town of Brush, Colo., Marissa Velazquez welcomes her students to class. It’s a sunny Saturday morning, and the day marks the halfway point in Velazquez’s class, a 10-week crash course on American history, civics and English.

Nearly all of the students work in either meatpacking or dairying. Everyone in it has the same goal: become an American citizen. In two hours, Velazquez runs through voting rights, the legislative process and some grammar tips.

Pop quiz: When do we celebrate the venerable American holiday of Flag Day?

Answer: June. Despite the fact that many natural-born Americans probably don’t know the answer, Flag Day is a potential topic on the test for U.S. citizenship.

While Velazquez runs through the history of voting rights in the U.S., she asks the students if any of them would have been able to vote in the mid-1800s. The answer is no. No student would have been able to vote in America’s early years. The class includes middle-aged women and young men of Mexican and Central American descent, and men from war-torn African countries.

“We have students from Mexico, from Guatemala, El Salvador and from Ethiopia,” says Velazquez, who came to Morgan County from Mexico as a child. “Some are refugees, and some, like me, were brought here by their family.”

Like many immigrants in the U.S., those in Morgan County are worried that changes to immigration policy pushed by the Trump administration could impact their families. Panic has swept through communities of immigrants all over the country, in highly visible places like Los Angeles and New York.

But in some smaller towns with less visible immigrant communities, that same fear has spurred some to take steps to go from green card holders to fully fledged citizens.

The number of people who applied for U.S. citizenship rose across the country in 2016. And while there are no definitive data for the first part of 2017, there are small indications that the same trend could be continuing this year.

To become naturalized, applicants are tested with a series of questions about the U.S. They are given a…