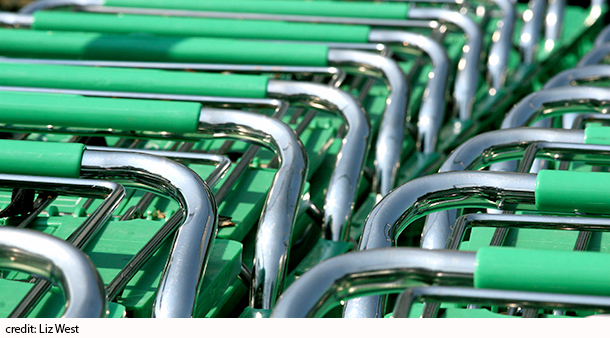 If this past election season has taught us anything, it’s that facts are not enough. “Facts” in the political arena become slippery, changeable, explosive. Each of us knows, unshakably, that our facts are the true facts. But though we like to see ourselves as logic-driven, we are social mammals. Our beliefs are formed tribally and instinctually. And a big part of our beliefs and social actions depend on group associations and self-image.

Recently the Journal of Consumer Research suggested that men may actively avoid environmentally-friendly products and behaviors such as recycling, because “green” choices are stigmatized as feminine.

According to some social scientists, there’s more to buying laundry soap than price, fragrance, and phosphates. Our everyday consumer choices (as well as our political opinions) are ways for us to publicly signal “this is who I am.” We are, in a sense, pack animals. We share important beliefs with those we see as respected leaders, whether these are family authorities, prominent community members, or people we feel we know (though they don’t know us) through news media. In addition to fortifying our group allegiances, while we go about our everyday business we are also subtly displaying our gender identity, just as most other species do. Can something as mundane as choosing cling wrap over reusable food storage really show our unconscious need to be perceived as masculine or feminine? If that sounds far-fetched, consider the more obvious. Does a man anxious to prove his virility buy a tiny efficient hybrid car, or a gas-guzzling shiny red V-8?

In December, the Journal of Consumer Research suggested that men may actively avoid environmentally-friendly products and behaviors such as recycling, because “green” choices are stigmatized as feminine. Obviously not all men share this eco-aversion. We all know guys who drive less, avoid disposable plastic, and buy seasonal local produce. But given a large sample of men, they showed consistently less concern for the environment and commitment to lower-impact choices, when compared to women of the same demographic. Social class complicates the issue. While conservation used to be bipartisan, lower-income Americans have come to associate environmental causes with that devil, elitism. Men who hunted, farmed, and fished once considered themselves stewards of nature, but the shifting demographics of the major political parties have dramatically altered the landscape.

Blame testosterone or conditioning? As the ongoing transgender debate reveals, the more we learn about gender identity, the more confused we, as a nation, get. Look at the public comments responding to any current feminist issue on social media: a tangle of primitive fears and anger, overlaid with attempts to rationalize and justify those gut-level defenses. Research published in Psychological Science (see below) even implicates the size of your biceps. Apparently men with greater upper body strength — the media paragon of “manly” — show greater self-interest in their political views. While it’s easy to argue that saving the earth is in everyone’s self-interest, a short-term “me” focus is unlikely to encourage diligent composting or weekend beach cleanup outings.

Something as simple as a logo design, in the hands of an expert marketer, conveys a host of messages about who should buy this product and how the product can optimize your life. These unspoken promises, of course, are largely based on fantasy.

This kind of thing can be hard to talk about. No one wants to be perceived as anxiously guarding (or denying) their manliness or femininity. Few would reduce their own choices to covert sexual signaling — we like to think we have solid, rational reasons for how we choose to spend our money and time. “I don’t have time to recycle.” “It doesn’t make a difference anyway.” “My work requires me to drive a nice car and travel frequently.” “Organic is a scam.” “You can’t prove humans affect the…