Leafy Nelson garden is at its best in autumn 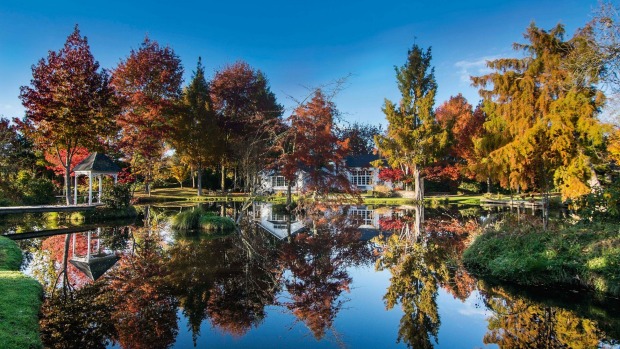 A hammock is not usually a symbol of industriousness – it’s usually the opposite.

But in the case of Michael Edwardes’ hammock, set between a larch and a silver birch, every strand is coated in a lovely thick lichen: proof that he’s been far too busy creating his incredible garden to have time for dreaming.

It’s 25 years since Michael began work on Quail Crossing, his 2ha property near Upper Moutere, north-west of Nelson. Back then, it was more wasteland than oasis: some raw paddocks, a patch of flax swamp, a garnish of gorse and scrub.

Today it is an intriguing oasis – photographed for this feature in both autumn and summer – with twisting paths, arched bridges, dense plantings and generous vistas.

The first step in the garden’s transformation began when Michael’s brother Lance, who owns the neighbouring property, suggested they flood the low-lying boggy paddock between their homes to create a lake.

Using the local Moutere clay, they built up banks, recycling the spoil to create humps and contours to add visual interest to the surrounding flatlands. Then they waited as water flowed in and filled the lake.

Michael recalls the weeks afterwards as a nervous vigil, worrying that the stopbank might collapse. “Every time there was a heavy rain I rushed out to check there was nothing trickling over the top. But Lance had designed it well.”

With the watery centrepiece established, he started planting trees, mostly pin oaks, liquidambars and silver birches in the early phase, getting the “bones” right.

He didn’t have a master plan; rather, he took his cue from his house. A 1920s school classroom that he’d had transported from Nelson and renovated, it cried out for an unfussy garden with a touch of romance.

“You need your house and garden to be connected, to really flow,” says Michael, who owns a giftware importing business in Nelson.

“An English gardener once said ‘the garden should be curtseying to the house’, and I agree.”