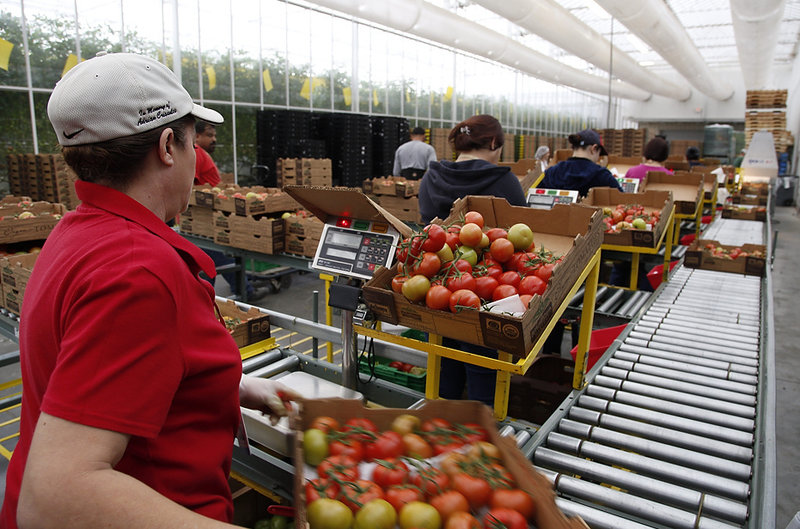 Workers at a tomato farm in Nogales, Ariz., got a check this month for more than $30,000. And they expect more money to come.

The approximately 130 workers of Wholesum Harvest are still deciding how to spend the money, but they say their initial priorities include subsidizing transportation, recreation areas and medical insurance.

Located just north of the Mexican border, the family-owned Wholesum Harvest is the first farm in the United States to receive certification from Fair Trade USA, which means it has demonstrated compliance with a checklist of more than 300 standards detailing working conditions and environmental protection.

Every fair-trade purchase involves a small financial premium paid by retailers and, ultimately, consumers. As the funds from these premiums accumulate, workers receive distribution checks and organize into committees to decide how best to spend the money.

Consumers in the United States have likely seen fair-trade labels on coffee beans or cocoa grown by farmers in countries like Ethiopia or Guatemala. But fair-trade certification now covers everything from clothing to seafood, and Fair Trade USA wants to expand its labels to cover domestic operations as well.

When the organization got started, “the feeling was that workers and farmers in the States didn’t need it,” says Paul Rice, president of Fair Trade USA. But that sentiment is changing.

Officials at Fair Trade USA expect another dozen American farms to become certified in the next year. And over the past few years, other nonprofits, such as the Agricultural Justice Project and the Equitable Food Initiative, have launched their own labeling efforts.

When Fair Trade USA opened its doors in 1998, the nonprofit’s focus was improving pay and working conditions for farmers in countries with the fewest legal protections. By providing a standard label that indicated adherence to a clear set of ethical and environmental standards, the organization aimed to help retailers and consumers decide which products to stock or purchase. (Fair Trade USA split from the umbrella organization Fairtrade International at the end of 2011, citing the desire to certify a broader range of producers and companies as Fair Trade.)