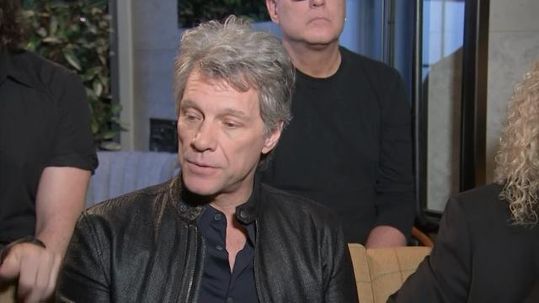 Bon Jovi is back.

Well, back from a case of bronchitis for frontman Jon Bon Jovi, anyway. The illness caused the band to postpone two shows at Madison Square Garden in New York City last week. The band’s Thursday, April 13 show at the Garden was the first of two makeup dates.

He apparently took some good medicine to get over his bronchitis. When he threw his Rangers shirt into crowd, it cause a mini rumble.

“I’m too old to have girls fighting over my stinky clothes,” said Bon Jovi, 55.

This is the “This House is Not for Sale” tour and it features, the hits, one or two chestnuts, and selection of tracks from the band’s vibrant new album. There’s was a segment of the show where Bon Jovi explained the roots of some of the new songs.

The origin of the new “New Year’s Day” began on Broadway when Bon Jovi saw a play that inspired him. He started singing the lyrics for his bandmate and drummer Tico Torres chirped up

“This music ain’t working for me,”…