Rhubarb: The Unsung Hero of the Spring Garden 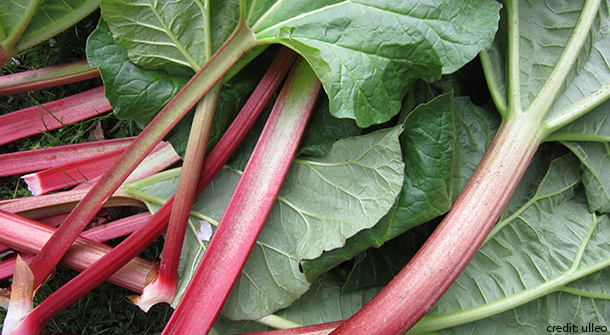 I didn’t have much experience eating—never mind growing—rhubarb before a friend took me to a workshop on dehydrating food at my local co-op. The workshop leader, a maven of dehydrating named Mary T. Bell, brought samples of dehydrated foods to try. The standout for me by far was a homemade fruit-rollup made from rhubarb she called “rhubarb lace.” I have a fondness for sweet-tart treats, and this one had me hooked at the first bite. I became a convert, both to dehydrating and to rhubarb. I’ll be forever grateful to the friend who encouraged me to attend.

Fast forward a decade, and we now have five thriving rhubarb plants in our tiny yard and an annual family ritual of making rhubarb leather each spring. My kids and I harvest huge armfuls of rhubarb stalks and turn them into piles of eagerly anticipated leather. We all love the flavor, and I love that the “treat” I’m feeding them is technically a vegetable. (Rhubarb was only declared a fruit in 1947 to lower import tax.)

Rhubarb has a delightful tartness that lends itself perfectly not only to desserts, but to savory dishes as well. In Asia and the Middle East, you’ll find rhubarb as an ingredient in sauces and vegetable dishes. Once, I had a Swedish student who made a delicious rhubarb syrup, which he said was commonly used in Sweden for homemade soda. Numerous visitors to our yard have recollected summers as children nibbling fresh rhubarb stalks or eating dishes of fresh rhubarb dipped in sugar.

If you’re trying to get more veggies in your diet, rhubarb is certainly one to consider. High in fiber and potassium, and a decent source of vitamins C and K, it’s also low in calories.

In the garden, rhubarb is absurdly easy to grow. A hardy perennial, once you’ve planted your rhubarb, there’s not much to do but enjoy harvesting it and experimenting with it in the kitchen. They’re also striking ornamental plants, great for incorporating into your edible landscape.

You can buy rhubarb crowns, but because gardeners divide plants every few years, you might just ask around for some free starter plants. I got my first crown from another gardener on our local Freecycle network a decade ago, and since then I’ve not only spread it around my own yard in an attempt to keep up with family demand for rhubarb leather, but also shared divisions with friends. Of course, you may not know exactly what type of rhubarb you’re getting, but if it’s from your area, it will at least be suited to your climate. If you’re after a certain variety, however, you may have to purchase your first crowns. You can also plant rhubarb from seed, but you’ll wait longer to harvest, and the plant may not have the same characteristics as the parent plant.

Dividing should be done during dormancy, either in early spring or fall. Rhubarb prefers cooler climates with average winter temperatures below 40 degrees Fahrenheit. Some varieties, including common garden rhubarb (Rheum x cultorum), will grow as far north as zone 1 and as far south as zone 9. Below zone 9, rhubarb must be grown as an annual.

Rhubarb comes in red and green stalked varieties. The green varieties are generally more vigorous and yield more, while red-colored stalks are reportedly a bit sweeter and look better in desserts.

I’ve read often that one plant produces plenty for a family, but I think that depends on the family! We easily use up everything we have from our vigorous plants for a big batch of rhubarb leather and gratefully accept donations from neighbors not using theirs. If all you’re doing is an occasional crumble, pie, or sauce, I suppose one plant would cover it. But if you become as enamored of rhubarb leather as we are, you’ll probably decide to add more, whether as an ornamental in your landscape or…