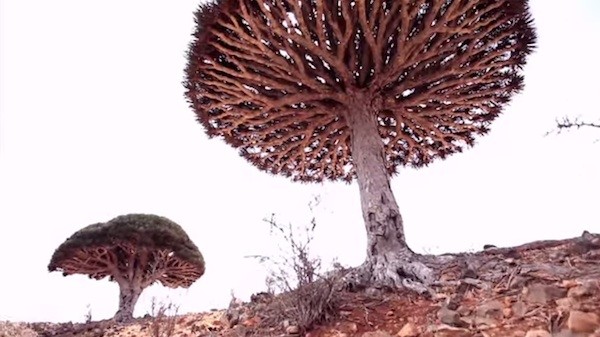 The dragon’s blood tree, only found in Socotra, is one of the identifiable features of the archipelago, a part of its alien landscape seen nowhere else on Earth.
(Photo : Peter Franc/YouTube)

The 20-million-year-old trees look straight out of a science fiction film, but the landscape of certain parts of Socotra is so unique and bizarre that it’s no wonder that such strange-looking trees sprouted from this ground.

Socotra Archipelago, considered part of Yemen on the Arabian Peninsula, is dubbed the Galapagos of the Indian Ocean due to its spectacular biodiversity, according to a report from Metro.

Its main island is also called Socotra, which is known to be so remote that a third of its plant species are found nowhere else on Earth. Botanists revealed that Socotra’s flora are among the ten most endangered in the world.

There are many unusual flora dotting the 3,600-square-kilometer…