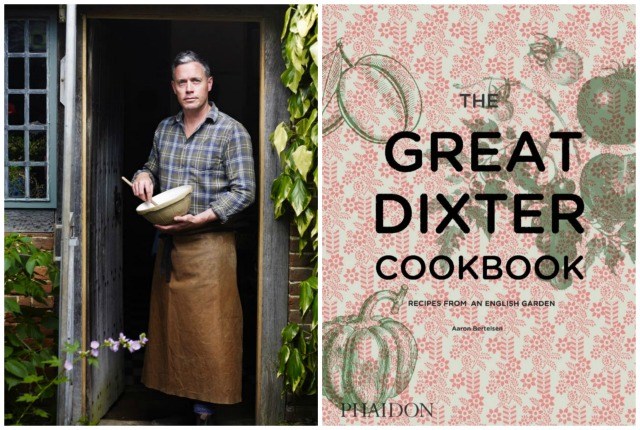 ONE FAVORITE PLANT, one that has been a beloved companion here for a very long time, is a variety of Euphorbia called ‘Dixter,’ named for a British garden that also perhaps left the strongest impression of any garden I’ve ever visited. Now I am happy to say I have a beautiful new cookbook bearing the same name:

“The Great Dixter Cookbook,” just out, is by Aaron Bertelsen, the vegetable gardener and cook at–you guessed it–Great Dixter, on the border of Kent and Sussex in England.

Aaron was on book tour in the United States lately, and made time just in the nick before boarding the plane home to talk about the Dixter vegetable garden, and what all he concocted from its long harvest season to serve up the 70ish recipes in “The Great Dixter Cookbook.”

Read along as you listen to our conversation using the player below (or at this link). It’s the April 17, 2017 edition of my public-radio show and podcast. Enter at the bottom of the page, below the very last comment, for a chance to win the cookbook for yourself.

Q. You’ve had quite a global horticultural adventure in your life to date, Aaron. Can you tell us a little about the stops along the way so far?

A. I was born in New Zealand and grew up in New Zealand, and then left to come to Britain at the age of about 22. I went to Great Dixter to be a student for three months, and stayed for three years.

A. And I traveled a bit regularly to Switzerland at that time, gardening in a chateau in Switzerland, then went to the States, to Iowa, for four months gardening. And then I went back to London to study at Kew, and then out to Israel for two years, working for two years in the botanic garden.

Q. And then back to Dixter, yes?

A. And then back to Great Dixter.

Q. And in your prolonged tenure you’ve been there about what—10, 11 years?

A. Interesting this is my 10th anniversary for growing vegetables there. I did not realize that when the book came out; it wasn’t until these travels that I realized it.

Q. So what’s the honorary thing you’re supposed to give someone for their 10th anniversary—is it a carrot or a rutabaga? [Laughter.]

A. Oh, yes. My grandfather was a great vegetable grower, and I grew up with that. I hadn’t realized his influence till I started writing this book. My style of gardening comes directly from him.

Q. Your job description on the book jacket says you are the Dixter vegetable gardener and cook, so what does the cook part mean—because it’s not a restaurant? [Laughter.]

A. No. Christopher died 11 years ago, and that was the moment where we lost his income from writing.

Q. And we should say that’s Christopher Lloyd, whose home Great Dixter was.

A. So we had to start finding a new revenue to keep the place going. We did this by doing study days and symposiums for North Americans. Fergus Garrett, the head gardener, gives them tuition, and I do the cooking. So that’s how the cook part came in, and it has evolved.

Q. Those are so popular; I know many people who have saved up their pennies to come over and do that.

A. We advertised one recently, and the 12 places sold out in 12 hours. So they seem to be going well.

Q. Then your cooking job is secure. [Laughter.] Do you have a cooking style, would you say? I could guess at it from looking at the cookbook, but how would you describe your culinary style?

A. It’s simple cooking, and enjoying the food within the season. I’m very aware of when things have their great moment, and I try to make the most of them in a way that’s simple, but so you can still taste the great flavor of homegrown vegetable, which I think is very important.

Q. There is nothing that is overwrought in the book, or fussy. I can see in the pictures the flavors of the vegetables and other ingredients coming through.

For those who may not have visited Great Dixter: how in the world so we really describe this place? [Laughter.]

A. It’s a very, very unique garden. It still has a very homely feel to it when you come through that little front gate and down that front path and see this beautiful house in front of you. The house is into three parts: There is a Medieval wing, there’s a Tudor wing, and there is the third one, a Lutyens wing. That sits in the middle, and this very interesting garden spreads around it, and is broken up into compartments with yew hedging.

The vegetable garden is up in the top part of that. It’s a full-on impact garden; lots going on, and very interesting in the way of using plants to their best.

Q. Is the vegetable garden where it always was, and does the public come to see it? Besides those study days you mentioned, there are also visitors on open days.

A. The vegetable garden used to be the whole of the high garden, and then Christopher reduced it in the 50s when he came home to live permanently. He needed space for his nursery, so three-quarters of it became stock beds. So we’ve only got a quarter of the left for vegetables.

Q. [Laughter.] The passionate collector, and someone who wants to try every plant shoved out some of those rutabagas.

A. You’d know about that.

Q. You mentioned there wasn’t the income any more after his death from his writing. I’m someone who owns many of Christopher Lloyd’s books, and I am glad to see you carrying on the writerly tradition at Dixter. I think one of his later books was called “Gardener Cook,” no?

A. Yes, and it was based on the sort of same ideals about enjoying the vegetable garden and flavors you get from it.

Q. How do the ornamental gardens and the kitchen garden relate, whether philosophically or otherwise? Do all the gardeners meet and have common missions, as one big team?

A. It’s al under the umbrella of Fergus, who is the head gardener and CEO of Dixter. His vision is what pushes us forward. The vegetable garden is a very different style to the decorative side, because a lot of the vegetables are grown in straight rows, whereas the decorative side is completely different foliages and colors that all blends into one—leaving no room for weeds.

Q. I’m glad to hear that you are “allowed” or encouraged to make it production-oriented and not to have to make it ornamental. I speak sometimes to vegetable gardeners at public gardens, and they have to do that and sometimes it’s not as productive as a result. Of course one can do both, and one doesn’t want a mess on one’s hands, but I think sometimes vegetables are best grown in an orderly manner.

A. I think that’s right, and I think vegetables are beautiful grown in these lovely, straight rows going across the beds. I’m pleased that we can still grow them in a traditional way. And it feels that it’s part of Great Dixter’s rich…