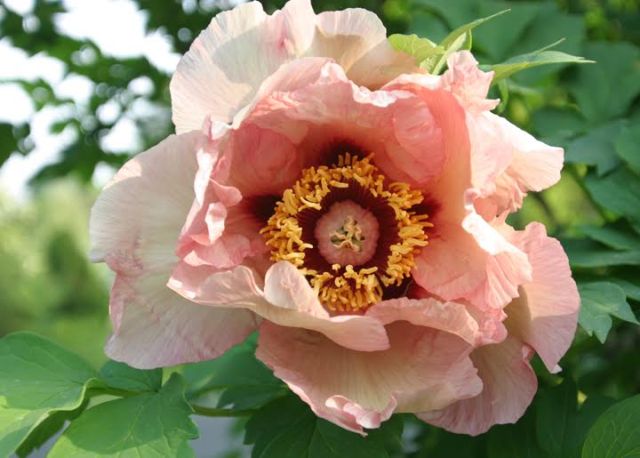 APPARENTLY I’M the kind of person people give tree peonies to, because over the years I have been gifted four of them by four different people. Call me the accidental tree-peony gardener, I guess–one who is long overdue for a 101 on their history, their pruning and other care. That’s what I just got from Jeff Jabco of Scott Arboretum at Swarthmore College in the horticulture-rich Delaware Valley of Pennsylvania.

Jeff is Director of Grounds and Coordinator of Horticulture at Scott and Swarthmore, where among the extensive and diverse plantings is a whole Tree Peony Garden area, one of the first collections established after Scott was founded in 1929 and now including more than 80 varieties of tree peonies. He is also vice-president of the Mid-Atlantic Peony Society.

Why consider these plants? Tree peonies are deer-resistant, extremely cold-tolerant, long-lived and really don’t require a lot of complicated pruning. And oh, those flowers (that’s one of Jeff’s favorites, ‘Nike,’ up top.).

Read along as you listen to Jeff’s and my chat on the April 10, 2017 edition of my public-radio show and podcast using the player below (or at this link). At the bottom of the page, learn about visiting Scott Arboretum at peak moments for tree peonies and other outstanding gardens and plant collections there.

Q. I’m so glad to finally get the lesson I am way overdue on. [Laughter.]

Q. It’s never too late. I do try to be nice to them. Does that count?

A. That certainly counts; they are very forgiving.

Q. Before we get into tree peonies, as a bit of a scene-setter: Tell us a little about the Scott Arboretum.

A. The Scott Arboretum is at Swarthmore College, so the entire college campus is around 400 acres. About 125 acres are intensely managed, and the Arboretum surrounds all of the academic buildings, administrative buildings, residence halls—so the Arboretum really surrounds people who live and work at the college and our students every day.

A. A lot of plants, yes. Mainly the Arboretum originally started with woody-plant collections, but over the past 25 or 30 years we have focused more on garden situations—so space between buildings, and courtyard gardens. So besides being a place to grow and display the best plants, to inspire home gardeners here in the Delaware Valley, we can also teach them about plant combinations, and good garden design also.

Q. I think I read somewhere that you have 4,000 different kinds of plant growing there on then campus; it’s probably even more now.

A. It probably would be more, if we kept track of our herbaceous plants.

A. All of our woody plants are mapped and catalogued, with computer records for all of them, and we’re just in the very, very beginning of starting to do that with herbaceous plants.

Q. You have really noted collections of flowering cherries, and crabapples, and so many things—lilacs, magnolias and more.

A. Yes, so as well as the old tress that have been growing here on site since the college started in 1864, the Arboretum started in 1929. So that was when the real collections idea started, with getting the various collections of plants so people could kind of compare one to the other and see which ones they liked for their home gardens.

Q. As I mentioned in the introduction, the tree peony collection was one of the early collections in that effort. Maybe we should define what a “tree peony” is, because it’s not just one species, correct?

A. That’s correct. “Tree peonies” is really more of a misnomer, because they are more shrub-like than tree. But I guess they get the idea of being “tree” because they are a woody peony. So if you would treat these peonies like you would for most of the peonies that people are familiar with—the herbaceous ones—and cut these to the ground every winter, you would never get flowering at all, because they flower on old wood.

A. That’s the Number 1 thing to learn: If you have a woody peony, you do not cut it to the ground in wintertime.

Q. Taxonomically speaking, where do we place these? Are they called a particular group, or do they have a Latin name that encompasses them all or what?

A. It’s funny, because as with most taxonomic things, it’s a real confusing thing. It all depends on which botanist you listen to and believe. It’s confusing also because these have been cultivated for hundreds and hundreds of years. There are records from the Chinese that go back into the first several centuries AD, of these plants being grown in a garden setting.

A. And before that they were used medicinally—but they have been used as garden plants since very, very early centuries AD. What they basically come from are several different species of woody peonies from the mountains of China, so they all originate from there.

So there was an original Paeonia suffruticosa—and many times if you look botanically, that’s what all tree peonies are listed as: suffruticosa, or suffruticosa hybrids.

Q. So instead of—what is it, Paeonia lactiflora, the herbaceous peonies?—gardeners would say “these are the suffruticosas” and “these are the lactifloras,” like it was black and white or A and B. But it’s not that simple?

A. Right—and botanists group all the herbaceous ones into a subsection of Paeonia and then a couple of different groups in there, and under the genus Paeonia for tree peonies, they have a subgenus of Moutan, which is actually the Chinese name for tree peony.

Q. It sounds puffy: moutan. It sounds like a big puffball to me; I don’t know why. [Update: When I got home from the recording studio, I remembered: The homonym “mouton” refers to sheep fur that has been made to resemble that of seal or beaver, hence my association with the word.]

A. It would probably be easier if we called it something completely different than just peony.

Q. So they have been cultivated since early centuries AD, as you said. I mentioned herbaceous peonies, and haven’t some of the woody ones and herbaceous ones also been crossed to make even further confusion?

A. Yes, and that’s a more recent thing. Basically those are a cross between different sections of the whole genus of Paeonia, so sometimes they are referred to as intersectional hybrids, but more recently they are called Itoh hybrids, because a gentleman by the name of Itoh from Japan was the first one to do this cross between a tree peony and a herbaceous peony, a Paeonia lactiflora.

These are very interesting plants that are really in fashion now. They are still relatively expensive because they are still new, but they do have that hybrid vigor, so they grow very fast.

What they do is they have the form and the substance of a tree peony—very large flowers, and in the color range that tree peonies come in—but the stems die back to the ground in the wintertime.

So you’ll get this big shrub, kind of like you would for herbaceous peonies; it can tend to be very rounded and full, and they want the same types of growing conditions as herbaceous peonies do, but they will die to the ground in the wintertime. They make excellent cut flowers and are a really beautiful plant.

Q. Wow, there is a lot going on. [Laughter.] I think I have some of those, too, by the way—I think Roy Klehm, a friend and one of the people I associate with the genus Paeonia, has gifted me some new invention of his. When I say invent obviously I mean breed and introduce. He has sometimes sent me surprise packages. [A flower cut from one such intersectional gift, above.]

I think I mentioned when we were emailing back and forth, that I have one oddball species that someone else who is a peony lover—Tony Avent of Plant Delights Nursery—he said to me once in a conversation that the most-underappreciated woody peony was Paeonia ostii [below]. So is that a tree peony?

A. That’s also in that sub-genus of Moutan, as Paeonia suffruticosa, and some people list that as a sub-species of suffruticosa. Another one like that is Paeonia subspecies rockii, or Paeonia rockii, the Joseph Rock’s variety. Some people are familiar with rockii from that.

Some of those species are wonderful. And a couple of other ones: One that’s pretty common in England is lutea, Paeonia lutea, and that’s a small yellow-flowered tree peony. And delavayi, and that’s a dark almost kind of brownish deep red-maroon color, is another species. So many of those have been some of the parents or greatparents or great-greatparents of our more modern tree peonies that we have.

A. It’s not a huge gene pool. Depending on who you talk to there can be anywhere from five to maybe 12 species that are in that section of Moutan,…