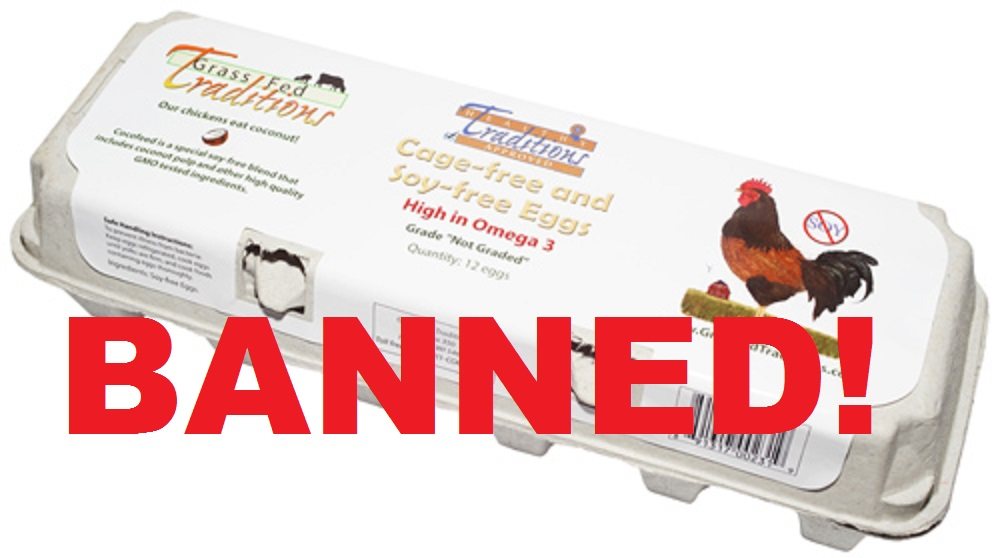 Would you like to purchase your eggs from the farm and transport them to your home without refrigeration? Wisconsin says “NO” – shuts down egg operation after 7 years of successfully shipping eggs all over the country.

People with allergies to soy protein now have one less source for purchasing soy-free eggs. Two small-scale farmers in Wisconsin have been informed by the Wisconsin Department of Agriculture that they must stop selling their soy-free and GMO-tested eggs to consumers until they meet state government regulations for shipping eggs that they allege the farmers are violating. They have been shipping their eggs directly to the homes of customers throughout the United States since the beginning of 2010.

In letters dated, March 13, 2017, the State of Wisconsin sent two farmers who are part of the Wisconsin Pasturelands Cooperative a Cease and Desist order regarding their eggs. The two farmers were informed that they were selling eggs and shipping them to consumers without proper refrigeration during shipping. They were specifically instructed that until this situation is corrected, “you shall not hold, process, package or sell the eggs for human consumption from your home or any other location.” (Source.)

The farmer cooperative run by Amish in rural Wisconsin since 2010 has been working together with an Internet business, Tropical Traditions (now Healthy Traditions), to market their eggs from cage-free chickens fed a specially developed feed that contains no soy, no corn, and ingredients that are tested to be free of GMOs and the herbicide glyphosate.

They are believed to be one of the first ones in the U.S. to offer eggs from chickens on a soy-free diet. The eggs were marketed under the Grass-fed Traditions brand, which is now part of the Healthy Traditions product line offering alternatives to commodity food. Healthy Traditions tests their products for the presence of GMOs and the herbicide glyphosate.

While the State of Wisconsin is claiming that the farmers are violating regulations for the refrigerated transportation of eggs, there is no indication that these regulations apply to consumers transporting their own eggs, whether they are transporting the eggs themselves directly from the farm, or paying someone else to ship them on their behalf.

Do Eggs Purchased by Consumers Need to be Shipped Refrigerated After Purchase?

When the Wisconsin Pasturelands Cooperative began producing their soy-free eggs in 2009, they consulted with local officials working with the USDA. They were told that there were no regulations in place directing consumers to transport their eggs refrigerated and that current regulations for transporting eggs were in place for large commercial egg operations for transporting their eggs to retail establishments. The Wisconsin Amish farmers constructed insulated ice houses to ensure that the eggs were always stored in temperatures below 45 degrees prior to shipping them to the consumers, in compliance with state regulations.

When Tropical Traditions offered the eggs online, they offered the consumers a choice of shipping options to have the farmers ship the eggs directly to them from the farm, including overnight shipment. They were informed before purchasing that the eggs were shipped unrefrigerated:

These eggs are not graded and will vary in size. They are shipped to you directly from the farm. The farmers are part of Wisconsin Pastureland. Tropical Traditions provides the payment service for you to purchase these eggs directly from the farmer, and delivery is provided to you via a national transportation company such as FedEx or UPS which you will choose at check out. Eggs are shipped unrefrigerated. Contact us for alternative delivery options if you need refrigerated shipping.

It has been well-documented that if eggs are not produced in “factory farms” where chickens are kept in small cages, that there is no need to refrigerate them. The U.S. is one of the few countries in the world that requires eggs to be sold refrigerated. Most of Europe, in contrast, sells eggs at room temperature.

If you’re an American, you probably store eggs in the refrigerator – and wouldn’t think of doing it any other way.

Yet, the US is one of the only countries where chicken eggs are kept refrigerated. In much of Europe, for instance, eggs are often stored right on the counter, at room temperature.

But then, US eggs would be illegal in Europe due to an egg-washing process that may actually make them more susceptible to contamination with bacteria like Salmonella.

When you have eggs from tens of thousands of chickens – or more — all under one roof, there’s a good chance they’re going to get feces and other contaminants on them. The US solution, rather than reducing the size of the flocks and ensuring better sanitation and access to the outdoors, is to wash the eggs. But this isn’t as innocuous as it sounds.

As the eggs are scrubbed, rinsed, dried, and spritzed with a chlorine mist, its protective cuticle may be compromised. This is a natural barrier that comes from the mother hen that lays the egg, and it acts as a shield against bacteria.

It even contains antimicrobial properties. US egg-washing strips this natural protectant from the egg, which may actually make it more likely to become contaminated. According to European Union (EU) guidelines:

“Such damage may favor trans-shell contamination with bacteria and moisture loss and thereby increase the risk to consumers, particularly if subsequent drying and storage conditions are not optimal.”

Industrial egg washing, by the way, is banned in much of Europe, not only because of potential damage to the eggs’ cuticles but also because it might allow for more “sloppy” egg-producing practices. The chief executive of Britain’s Egg Industry Council told Forbes:

“In Europe, the understanding is that [prohibiting the washing and cleaning of eggs] actually encourages good husbandry on farms. It’s in the farmers’ best interests then to produce the cleanest eggs possible, as no one is going to buy their eggs if they’re dirty.” (See: Americans – Why Do You Keep Refrigerating Your Eggs?)

The farmers in the Wisconsin Pasturelands Cooperative have very small flocks that are free range, and they did not wash the eggs prior to storage. Just before shipping the eggs to the consumer, they used a coconut water vinegar solution to wash the eggs and then coated them with coconut oil just prior to shipment.

Is California Department of Food and Agriculture Behind Demands to Stop Selling Wisconsin Eggs to Protect the Commercial California Egg Industry?

In 2012 “Egg Safety Quality Management Central District Supervisor” John Ramos of the California Department of Food and Agriculture (CDFA) attempted to stop the shipment of eggs from the Wisconsin Pasturelands Cooperative into California.

CDFA had somehow obtained a box of eggs from a FedEx facility that was being shipped to a Tropical Traditions customer.

Mr. Ramos sent a letter to Tropical Traditions demanding that they immediately stop selling eggs in California, stating that the package they found in the FedEx facility was not refrigerated properly. It should be noted that this action was taken after seizing a package in a FedEx facility in route to a customer, not because of any customer complaint about the eggs. He stated:

I received informaion (sic) from one of our Stanislaus County Inspector who was at a Fed-Express office. He noticed a package being delivered from your company. The pictures he sent me where that of the egg carton you are using to package your eggs. There are several violations on the container:

3. No size or grade “not graded” is not acceptable.

In addition you are not allowed to ship non refrigerated eggs to consumers. (45 degrees F)

In his correspondence, Mr. Ramos asked:

Are you a registered egg handler?

Where are the eggs being packed?

How long have you been selling eggs?

Also is there a physical address for the Springville, CA location?

I will be in the Springville area tomorrow doing some inspections.

Tropical Traditions simply maintains a Springville, California address for handling mail orders. So when Mr. Ramos showed up at the local post office in Springville, he reportedly flashed his badge and intimidated postal workers into giving him the personal residence address of one of Tropical Traditions’ managers.

He allegedly showed up at the manager’s personal residence and demanded to see the egg operation. Seeing that there was obviously no egg farm on his property, the manager reportedly informed the inspector that the egg operation was in Wisconsin and that Tropical Traditions never took possession of the egg inventory – they simply provided an online service whereby consumers could purchase the eggs directly from the farmer. The farmers in Wisconsin were in complete compliance with regulations of selling eggs directly to the consumer from their farms, according to local authorities in…