Aliens in My Garden: Banded Argiopes 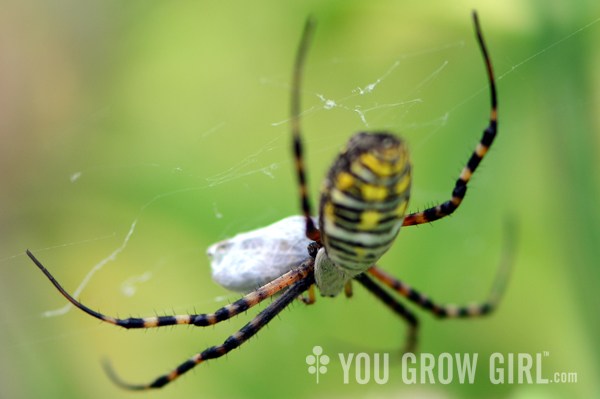 Fall is the season of the spider around here. Well, I suppose that’s not exactly accurate. Summer seems to be the season of the spider in my kitchen. Fall is their season in my garden. Every summer a range of smaller species and one female Cross Orbweaver (Araneus diadematus) sets up shop in my kitchen window. They keep to themselves for the most part, the orb weavers building incredibly elaborate webs on which they catch the flies that follow me in through the garden door.

Ours is a mutually beneficial relationship, although it is also a tenuous one. They take care of the fruit fly plague, and in return I allow them to stay as long as they agree to remain mostly out in the open where I can see them. I have a healthy respect for spiders. I might even say that I like them. They are fascinating creatures to observe as long as you don’t imagine yourself in the place of their prey. In that manner, they are like tiny sharks living all around us. Their senses are acute and their movement is swift and sure. One second they are motionless, chilling out in their web, and within seconds they have caught a fly and in what seems like only moments after that they have it wrapped tight inside a silk cocoon and extracted its body fluids. Yikes. Spiders don’t mess around. Plus they have crazy eyes and fangs. It’s no wonder that arachnophobia is within the top 10 of all phobias world wide. As a gardener I appreciate the way they keep insect pest populations in check. Unfortunately, they are not discriminating so a few beloved pollinators are sure to be lost amidst the mosquitos, jumping sap suckers, and anything else that happens to be feeding on me or my plants. Still, they have an important role to play. So do sharks, for that matter.

I appreciate spiders for the important place they take in a healthy ecosystem, but I don’t like them ON my person. I can tolerate the hundreds of dead insect carcasses that they discard onto my once clean window ledge and through the years, both Davin and I have experienced great delight in the small window into the lifecycle and habits of the spiders that have taken up residence in our kitchen. We have given them a series of lazy and uncreative names: Spidey 1, Spidey 2, etc. We often discuss the spiders and their progress. “Have you seen Spidey today? She didnt come out.” “Oh, she’s still alive. Just hiding out on top of the window ledge.” We have shared a sense of pride in those that have made it through into the winter months and have even gone out of our way to catch flies to feed to the weakened spiders that struggle to keep their webs in shape as the season progresses. It has been almost heartbreaking to watch as their webs become scragglier and scragglier, and I’ve felt a strange sense of loss when we inevitably find…