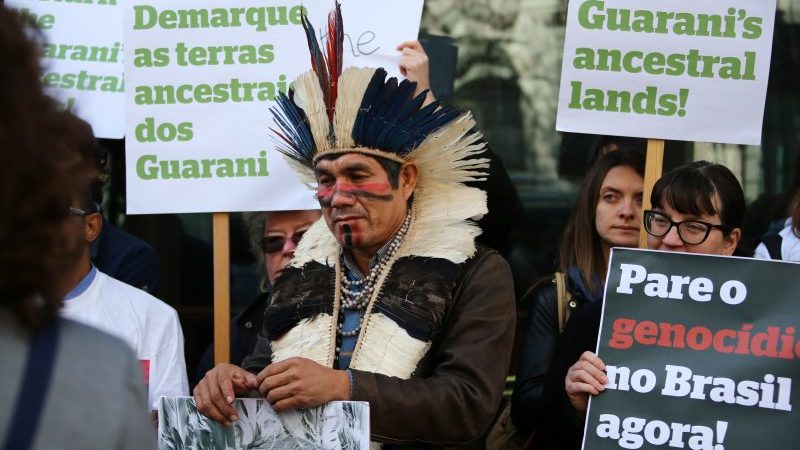 “They use tractors with big chains to cut down everything.” Ladio Veron, leader of the Guarani-Kaiowá people, is describing the expansion of agribusiness in Brazil.

“They poison the rivers and the land,” Veron tells Climate Home. “They plant more and more, for sugar cane and refineries,” and when the sugar cane fields are burned to make the crop easier to harvest, the smoke “is like an atomic bomb exploding”.

Veron is touring Europe to appeal for solidarity against violent takeovers of indigenous land for soya and sugar cane plantations, and cattle ranches. For him, it is deeply personal: his father Marcos Veron was murdered in a territorial dispute.

The state of Brazil recognises 13.8% of its territory as indigenous land (1,173,106 square kilometres, an area five times the size of the United Kingdom). But the Kaiowá are being driven out of their lawfully recognised land in Mato Grosso do Sul.

Brazilian NGO Conselho Indigenista Missionario (Indigenous Missionary Council or Cimi), documents the violence. A 2015 report counts 754 killings of indigenous leaders in Brazil between 2003 and 2014. Out of these, 390, more than half, occurred in Mato Grosso do Sul.

Without access to their lands, the Guarani can’t hunt or fish, or plant enough crops to feed themselves. Since 2005, according to NGO Survival International, 53 Guarani children have died of starvation.

Instead, the Kaiowá often live in makeshift tents and shacks, in small camps between the fenced off plantations and busy motorways.

“Each of the roadside camps is tiny, maybe 180 metres by 40 or 50 metres, smaller than a football pitch,” Sarah Shenker, senior campaigner at Survival International told Climate Home. There might be 15 to 100 people living on each patch of land. “There is no space. No clean water, constant illness,” says Shenker.

As a result, the Kaiowá people have the highest suicide rate in the world. Since 1986, Survival International has documented 517 Guarani suicides – the youngest reported to be nine years old. The UN described the situation as a humanitarian crisis.

In a bid for international support, Veron is visiting…