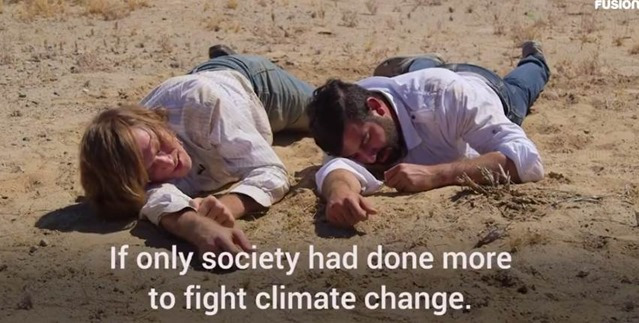 Josh Willis, of NASA JPL, has a new video out entitled, “Straw Men of the Apocalypse – How to deal with your climate change denying uncle.”

Notice that “catastrophic” is apparently not scary enough, these days. Global warming is now “the Apocalypse.”

The video starts out with two guys crawling along the parched ground under the blazing desert sun. One of them says to the other, “We’re gonna die out here, man. If only society had done more to fight climate change.” And it goes downhill from there.

There’s really nothing new in his video, nor in this article debunking it. So if you’re a “regular” at WUWT, and you’re hoping to learn something new, you needn’t bother reading the rest.

I counted eight claims in Josh Willis’s video. Let’s look at them, one by one:

If those fellows are dying in the hot desert, they obviously are not at higher latitudes. Where they are, global warming is slight.
In fact, higher CO2 levels make plants more drought-resistant. So, thanks to anthropogenic CO2, deserts and near-deserts are shrinking and greening, most strikingly in the Sahel & Sahara. Even the severely politicized National Geographic admits that it is happening, though they don’t mention CO2:

Claim #2. “For the past 30 years the energy from the sun has decreased, but…”

Half true. Other than fluctuating up and down with the sunspot cycle, total solar irradiance has been very, very flat for the last 30 years. It has declined, but not noticeably until the last 15-20 years, and only slightly even then. A quick Google search finds many graphs; here’s one of them:

Half true. Until the just-ended El Niño, global warming had paused for about two decades. But we just had a very strong El Niño, and that pushed up the right-end of the linear fit, so that climate campaigners can now say that “the Earth has continued to warm up.” But it didn’t exactly “continue” warming, it just “blipped up” in 2015-2016, due to the El Niño.

Here’s a graph from a 2014 paper by Ben Santer (with many co-authors, including Gavin Schmidt):

They sought to subtract out the effects of ENSO (El Niño / La Niña) and the Pinatubo (1991) & El Chichón (1982) volcanic aerosols, from measured (satellite) temperature data, to find the underlying temperature trends. The black line is averaged CMIP5 models, the blue & red are measured temperatures, with those adjustments:

A. The models run hot. The CMIP5 models (the black line) show a lot more warming than the satellites. The models show about 0.65°C warming over the 35-year period, and the satellites show only about half that. And,

B. The “pause” began around 1993. The measured warming is all in the first 14 years (1979-1993). Their graph (with corrections to compensate for both ENSO and volcanic forcings) shows no noticeable warming since then.

Note, too, that although the Santer graph still shows an average of almost 0.1°C/decade of warming, that’s partly because it starts in 1979. The late 1970s were the frigid end of an extended cooling period in the northern hemisphere. Here’s a graph of U.S. temperatures, from a 1999 Hansen/NASA paper:

That’s consistent with a TCR sensitivity of less than 1.0°C, which implies an ECS sensitivity of at most about 1.5°C, which most people would agree is nothing to worry about.

Claim #4. “The warming in the past century has been faster than at any time in the last several million years.”

That’s nonsense. That fallacy is a product of statistical illiteracy. Paleoclimate information, inferred from indirect evidence like marine sediments, is naturally “smoothed,” by processes which blend the evidence from consecutive decades, centuries, and millennia. As every engineer knows, when you smooth a graph, sharp fluctuations disappear. But the climate campaigners apparently don’t know that. They see a paleoclimate graph and say, “look, it took ten thousand years to change by 3°, that’s much slower than the 20th century!” But, of course, they have no way of knowing how many times it went up or down by 2° in a decade during that ten thousand years.