Climate talks end in call for solidarity, but real test is to come 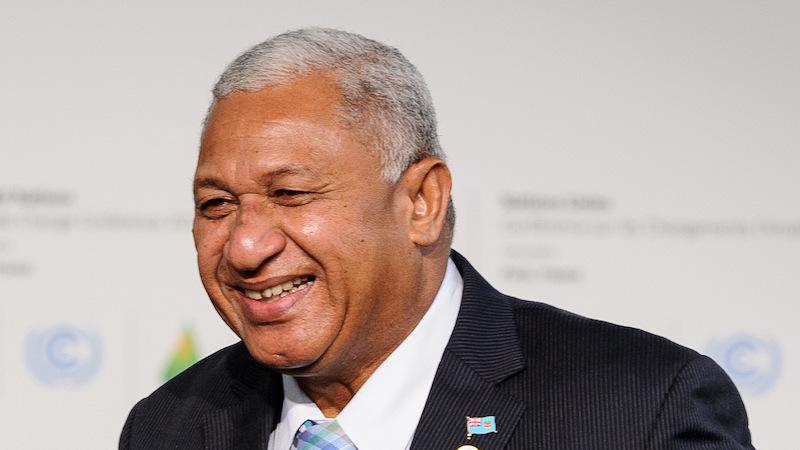 Fiji’s prime minister Frank Bainimarama, the incoming president of the next major climate meeting in November, closed talks in Bonn on Thursday with a call for solidarity.

In the past fortnight, UN negotiators continued writing the rules for an agreement designed to change the global energy system. At the same time, they have been faced with the potential withdrawal of the US – the world’s largest economy – from that process.

“The ball is being passed to Fiji this year at a very critical time,” said Bainimarama, whose tiny island nation will not actually host the next meeting. Instead talks will recommence in Bonn later this year, presided over by the Fijians.

Despite the inevitably colder weather, Bainimarama promised the meeting would be infused with a Fijian spirit of “inclusiveness, friendliness and solidarity”.

You can also be sure the islanders will highlight how exposed they are to the increasingly intense cyclones, rising sea levels and acidifying oceans that come with global warming.

“We who are most vulnerable must be heard,” said Bainimarama, making a point to include residents of Miami and New York in a list of those in peril. “We must speak out for the whole world – every global citizen – because no-one, no matter who they are or where they live, will ultimately escape the impact of climate change.”

When negotiators reconvened in Bonn last Monday, the session was predicted to be – depending on whom you asked – dull as a day with no sun or total mayhem.

US president Donald Trump was fulminating in the White House over whether to withdraw from the 2015 Paris Agreement. The US team, for years a lynchpin of the negotiations, was arriving with no mandate.

And yet, when the plenary hall filled up last Monday morning, with media standing at the back like vultures waiting for a battle, nothing much happened. The great cogs of a process that has run for more than two decades clunked back into gear and the whole show creaked on.

In the world outside, a cascade of announcements bolstered the political, legal and economic case for the Paris accord.

The business community across the world, especially in the US, rallied. Corporations, many of whose leaders sit on Trump’s business council, took out letters in major newspapers urging Trump to remain within the agreement.

In Bonn, the head of the UN’s climate secretariat Patricia Espinosa told the press that the Paris agreement, and the process itself, had “an incredible amount of support”, evinced by the cascade of ratifications on the books – now 146 out of 197 parties.