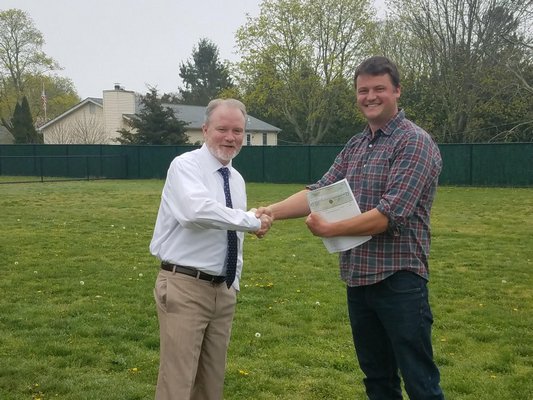 Vanessa Parsons is the first to admit that her thumbs are not the greenest, though that has never stopped her from toiling in the dirt with her three young children.Ms. Parsons, whose oldest, Emily, 6, began attending kindergarten last fall, explains that they, along with her younger set—Clara, 3, and William, 1—typically plant an assortment of herbs and berries outside their East Quogue home each spring.

But it was not until Emily began attending class at the East Quogue Elementary School this past September that Ms. Parsons, who owns Living Art Aquariums in the hamlet with her husband, Matthew, decided to investigate whether there was enough interest to create an educational garden at the Central Avenue school, explaining that other nearby districts—such as Hampton Bays and Tuckahoe—already feature similar vegetable gardens that are planted, and maintained, by students.

“I know that gardening is very big out here on the East End and I know other schools had them,” Ms. Parsons said during a recent interview. “I thought it would be good if we had one, too.”

It turns out there was interest, at least from East Quogue School Superintendent Robert Long, but one obstacle stood in the way: funding.

The two continued to kick around the garden idea,…