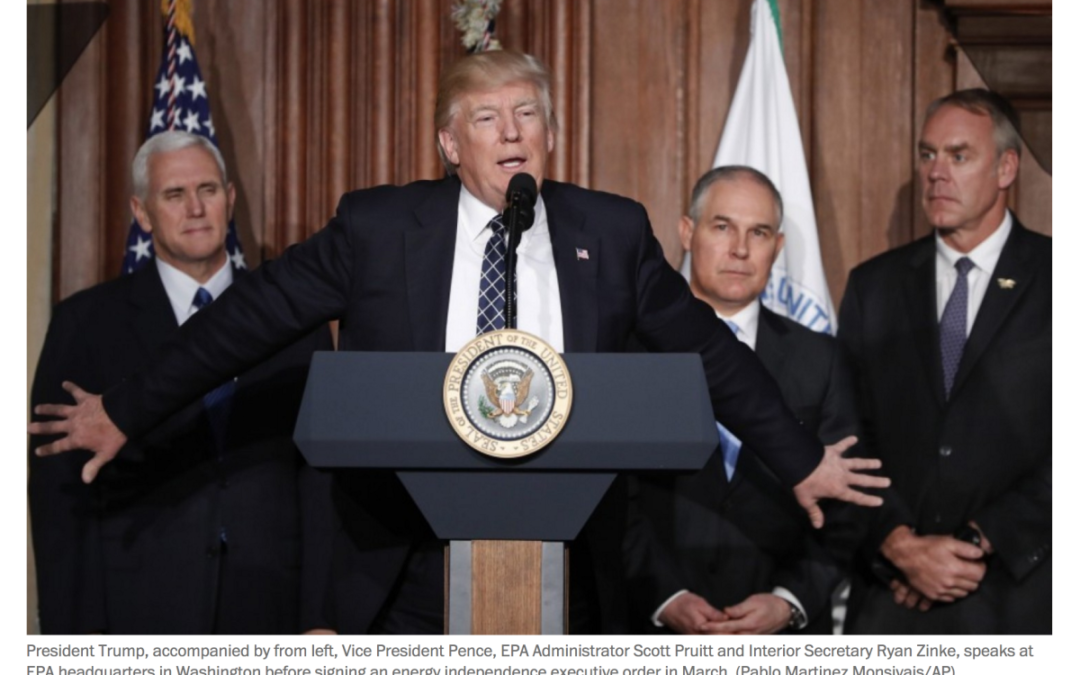 Are you are still wondering whether to Exit Paris? Overseas and US officials, environmentalists and bureaucrats urge you to Remain. But you promised voters you would Exit. Please keep your promises.

Exit Paris isn’t about the environment. It’s about letting us utilize our fossil fuel energy to create jobs, rebuild our economy, and Make America Great Again. It’s about avoiding immense transfer payments from the USA to foreign governments, bureaucrats and parties unaccountable to Trump-voting taxpayers.

Worse, even if the USA Remains, and the repulsive payments flow, Paris offers no help in removing real air pollutants. Carbon dioxide isn’t one of them, by the way: it’s plant food, not poison.

Some high profile American companies recently signed a note urging Remain. Follow the money. Many leaders of those companies didn’t support your election and voted Hillary. And they expect to get billions from us taxpayers and consumers, for locking up our fossil fuels and switching to renewable energy.

We who voted Trump, your base, want Exit. Just as you promised.

Remain, so that we maintain markets for American energy technologies? Some companies will make off like bandits. The rest of us will get skewered. Global buyers of energy systems understand the benefits of America’s world-beating fossil technologies. They understand the life-cycle value of after-sales support poorly delivered by our international competitors. Trust Chinese warranties? We don’t either.

Why ask corporations about Remain or Exit Paris? They pass Remain-driven energy costs on to consumers. Instead, ask consumers about ever-increasing energy bills. You’ll get a different answer.

Corporations have shareholders in the USA, of course, and some of them elected you. But corporations also have European shareholders. Corporations there must survive political economies aligned with Paris’s unaccountable bureaucratic control of energy, jobs, economic growth and living standards. You have to choose: shareholders, entrepreneurs, consumers and families – or rent seekers and bureaucrats.

Renewable energy lobbyists, Obama holdovers – and misguided souls in your own administration – say Remain, to keep a seat at the table. That’s nonsense. Businesses were flogged by the past administration and no longer recognize their obligations to shareholders, much less to societies they are supposed to serve with reliable, affordable power that creates and preserves jobs.

Those companies responded to incentives in a massively hostile American political economy. Those hostilities represent decades-long campaigns by anti-energy groups that got rich while claiming to represent shareholders, and by foreign governments seeking transfer payments. You promised change.

Mr. President, you’ll be pressured mightily at the G7 to Remain Paris. Hugely-invested and conflicted world leaders will give you no peace. Your delegation will hound you. Keep your Exit staff close. Why?

Because America got snookered into signing the Arctic Council’s May 11, 2017, Fairbanks Declaration. Now the same pro-Remain forces will claim America wants that language. What language?

Start with Perambulatory Paragraphs 8 & 9: “Reaffirming the United Nations Sustainable Development Goals and the need for their realization by 2030.” And this: “U.N. Sustainable Development Goal 13.a: Implement the commitment undertaken by developed country parties to the United Nations Framework Convention on Climate Change to a goal of mobilizing jointly $100 billion annually by 2020 from all sources to address the needs of developing countries in the context of meaningful mitigation actions and transparency on implementation, and fully operationalize the Green Climate Fund through its capitalization as soon as possible.”

They want to take our money, while they shackle our economy. But there’s more.

Paragraph 31 (p. 6): “…we welcome the updated assessment of Snow, Water, Ice and Permafrost in…