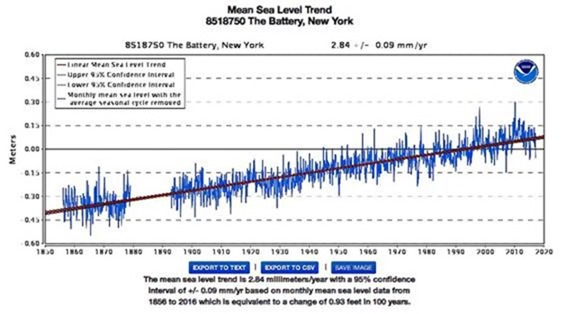 The longest NOAA tide gauge data coastal sea level rise measurement record is at The Battery in New York with its 160 year long data record showing a steady rate of sea level rise of about 11 inches per century.

The 2016 updated NOAA tide gauge data includes four long time period (between 92 and 119 years) coastal locations for California at San Diego, La Jolla, Los Angeles and San Francisco. The actual measured and steady coastal rates of sea level rise at these locations vary between about 4 to 9 inches per century.

NOAA tide gauge coastal sea level rise data measurements encompassing the 46 year period from 1970 through 2016 do not support and in fact clearly contradict the UN IPCC AR5 WG1 conclusion regarding supposed man made contributions to increasing rates of sea level rise since the early 1970s.

Meanwhile here in California, the climate alarmist capital of the U.S., the Working Group of the Ocean Protection Council Science Advisory Team, supported and convened by California Ocean Science Trust have just released a new report “Rising Seas in California, An Update on Sea–Level Rise Science“ which is intended to provide statewide sea-level rise policy guidance.

The report has been widely hyped by climate alarmist main stream media http://www.mercurynews.com/2017/04/30/oceans-rising-faster-than-scientific-forecasts/ based on the highly speculative and scientifically unsupported claim that sea levels at the states coastline could rise by 10 feet by the end of the century.

The new state report is based on projections derived from semi-empirical climate models which supposedly provide probabilistic assessments of coastal sea level rise for California locations.

The UN IPCC AR5 WG1 report dealt extensively with the many problems and shortcomings of sea level rise semi-empirical climate models (SEM’s) and provided a litany of significant and complex unresolved scientific issues.

Provided below are IPCC identified issues with SEMs as noted in various chapters of the AR5 WG1 report.

“The basis for higher projections of global mean sea level rise in the 21st century has been considered and it has been concluded that there is currently insufficient evidence to evaluate the probability of specific levels above the assessed likely range. Many semi-empirical model projections of global mean sea level rise are higher than process-based model projections (up to about twice as large), but there is no consensus in the scientific community about their reliability and there is thus low confidence in their projections. {13.5}”

“Making projections with a semi-empirical model assumes that sea level change in the future will have the same relationship as it has had in the past to RF or global mean temperature change. This may not hold if potentially nonlinear physical processes do not scale in the future in ways which can be calibrated from the past. There is no consensus in the scientific community about the reliability of semi-empirical model projections, and confidence in them is assessed to be low. {13.5.2, 13.5.3}”

“There is low confidence in semi-empirical model projections of global mean sea level rise, and no consensus in the scientific community about their reliability. {13.5.2, 13.5.3}”

“Despite the successful calibration and evaluation of semi-empirical models against the observed 20th century sea level record, there is no consensus in the scientific community about their reliability, and consequently low confidence in projections based on them. {13.5.2, 13.5.3, Figure 13.12}”

“Semi-empirical models (SEMs) project sea level based on statistical relationships between observed GMSL and global mean temperature (Rahmstorf, 2007a; Vermeer and Rahmstorf, 2009; Grinsted et al., 2010) or total RF (Jevrejeva et al., 2009, 2010). The form of this relationship is motivated by physical considerations, and the parameters are determined from observational data—hence the term ‘semi-empirical’ (Rahmstorf et al., 2012b).”

“SEMs do not explicitly simulate…