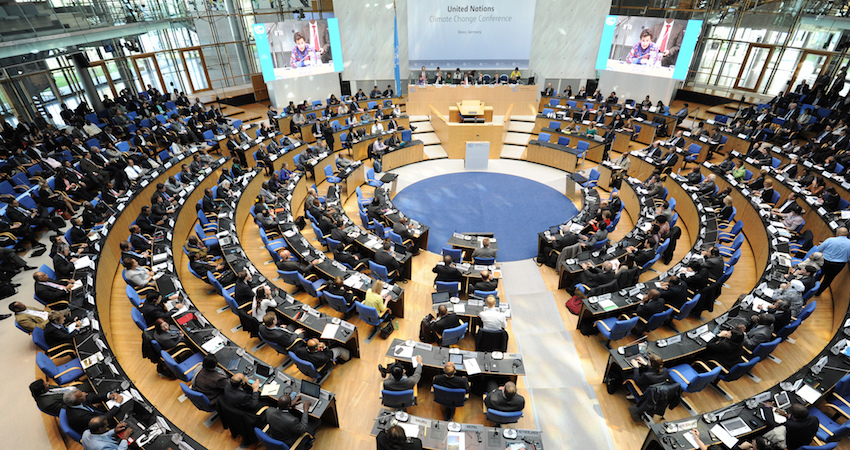 As Trump mulls over leaving the Paris agreement, US officials fly in to interim talks with no clear mandate

As UN climate talks prepare to resume in Bonn on Monday, records show the US state department has had little formal engagement with the process since Donald Trump assumed the presidency.

Governments from across the world, including the US’ key allies and adversaries, have been staking out their positions on matters at once arcane and consequential. Since the beginning of this year, 241 submissions have been made to the various work streams of the UN Framework Convention on Climate Change (UNFCCC). Just two are from the US – both pre-Trump.

One set of answers to a peer review, required under the process, was delivered this week in staccato responses that highlighted the US preference for jobs, rather than climate action.

A former US government official familiar with the talks said it was “quite unusual” for the US to have made no submissions in the lead up to a meeting.

“The US generally addresses all issues in detail in order to promote US interests. Other countries are also very interested in US views and ideas, so it’s disappointing,” the former official said.

Trump continues to mull a decision to leave the Paris accord or not. This has left the US climate team, for much of the past decade an influential force at UN negotiations, arriving in Bonn with little direction, according to several former government employees interviewed by Climate Home.

Andrew Light, until 2016 a state department climate advisor, now working with the World Resources Institute (WRI), said the lack of US submissions was “most likely an indication that they have received very little, if any, policy guidance from the new Trump team at [the] state [department] since the inauguration”.

“That’s in some measure because none of the senior political positions with jurisdiction over the UNFCCC have been appointed yet at state,” said Light, noting that the Office of Global Change (OGC), which leads the US climate negotiations, was not an exceptional area of the state department in this regard.

At time of publication, the state department had not responded to Climate Home’s request for comment.

Negotiations are turning to the creation of a rulebook that will govern the 2015 Paris Agreement on climate change. How will nations account for and report the progress they are making? How will the gap between commitments made so far and what the climate actually needs be closed?

Analysis: The seven men who will decide US role in Paris climate deal

The Bonn “intersessionals” – regular UN climate meetings held in the middle of each year – are technical affairs. Big political decisions are held until the end of the year Conference of…