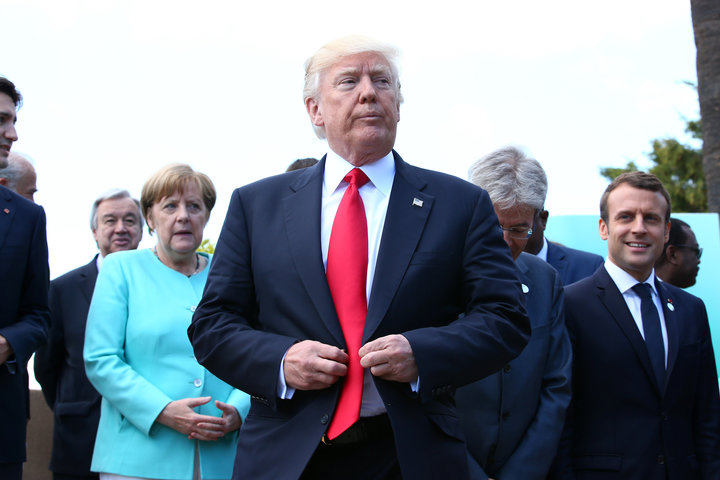 The White House will decide next week on whether to remain in the Paris Agreement, the historic climate 2015 pact President Donald Trump vowed to withdraw from during his campaign last year.

In an announcement harkening to a characteristically reality TV cliffhanger, the president teased his decision in a tweet on Saturday morning during a summit with the Group of 7 industrialized nations in Italy, where the U.S. clashed with European allies over climate and trade. Trump initially delayed the decision until after the G7 meeting, which ended on Saturday.

European, Canadian and Chinese leaders have urged Trump to keep the U.S. in the accord. All but two countries ― Syria and Nicaragua ― signed the agreement committing to begin slashing planet-warming emissions.

The accord is not legally binding. And even if every country reached its promised goals, the targets set out in the agreement would not prevent the Earth from warming beyond the 3.6 degrees Fahrenheit above pre-industrial levels, after which scientists predict the most catastrophic effects of climate change would become irreversible. But the United Nations-brokered deal marked the first time the world, including the U.S. and China, the biggest polluters by far, agreed to slash emissions with the intent of halting global warming.

Still, Trump pledged to “cancel” the agreement during his openly nationalist presidential run last year, insisting multilateral deals like it were harmful to U.S. economic interests. In March, he ordered the Environmental Protection Agency to review the Clean Power Plan ― the only U.S. policy for cutting emissions from the electricity sector. Without this sweeping regulation, which puts limits on coal-fired power plants and encourages the proliferation of renewable energy, the U.S. won’t even come close to meeting its emissions goals.

“It seems President Trump is seeking to build the kind of suspense that is usually reserved for reality shows,” Heather Coleman, climate and energy…