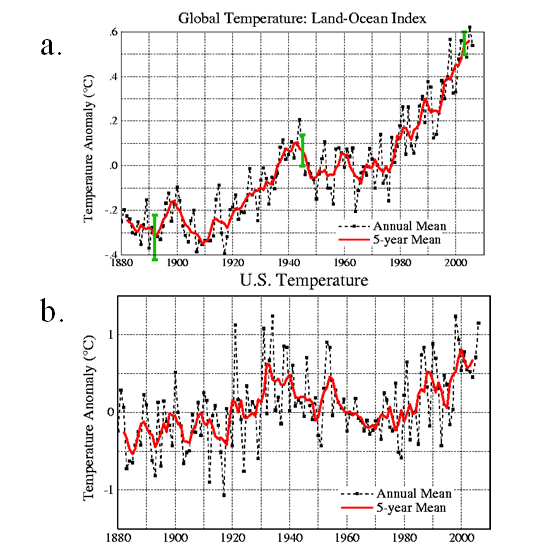 Temp data in dispute can reverse conclusions about human influence on climate.

Exploring some of the intricacies of GW [Global Warming] science can lead to surprising results that have major consequences. In a recent invited talk at the Heartland Institute’s ICCC-12 [Twelfth International Conference on Climate Change], I investigated three important topics:

1. Inconsistencies in the surface temperature record.

2. Their explanation as artifacts arising from the misuse of data.

Although these two trends look similar, they are really quite different: the initial warming is genuine, but the later warming is not. What a surprise! I wouldn’t exactly call it ‘fake,’ but it just does not exist; I try to demonstrate this difference as an artifact of the data-gathering process, by comparing with several independent data sets covering similar time intervals.

The later warming is contradicted by every available dataset, as follows:

**the surface record for the ‘lower 48’ [US] shows a much lower trend; [see fig 1, bottom]; presumably there is better control over the placement of weather-stations and their thermometers;

**the trend of global sea surface temp [SST] is much less; with 1995 temp values nearly equal to those of 1942 [acc to Gouretski and Kennedy, as published in Geophysical Research Letters in 2012];

** likewise, the trend of night-time marine air-temperatures [NMAT], measured with thermometers on ship decks, according to data from J Kennedy, Hadley Centre, UK

** atmospheric temperature trends are uniformly much lower and close to zero (during 1979-1997), whether measured with balloon-borne radiosondes or with microwave sounding units [MSU] aboard weather satellites [see fig 8 in ref 2].

**compatible data on solar activity that show nothing unusual happening. [Interestingly, the solar data had been assembled for a quite different purpose – namely, to disprove the connection between cosmic rays and climate change [see here fig 14 of ref 2], assuming that the late-century warming was real. In the absence of such warming, as I argue here, this attempted critique of the cosmic-ray –climate connection collapses.]

**proxy data also show near-zero trends, whether from tree rings or ice cores, as noted about 20 years ago [see fig 16 in ref 1 and figs 2 and 3 of ref 2; plus those that may have been withheld by Michael Mann]. [If you look carefully at Mann’s original 1998 paper in Nature or subsequent copies, you will note that his proxy temps cease suddenly in 1979 and are replaced by temps from thermometers from CRU-EAU, the Climate Research Unit of East Anglia University. This substitution not only supplies the ‘blade’ of Mann’s ‘hockey-stick’ but enables the claim of IPCC-AR3 [2001] that the 20th century was the warmest in the past 1000 years, surpassing even the high temps of the Medieval Warm Period. In Climategate e-mails this substitution was referred to as “Mike’s Nature trick. I can’t help wondering if Mann’ s original post-1979 proxy data showed warming at all; perhaps that has some bearing on why Mann has withheld these data; it could have killed the blade and spoiled the IPCC claim.]

On the other hand, the early warming [1910-40] is supported by many proxy data – including temps derived from tree rings, ice cores, etc; unfortunately, we could not find any temperature data of the upper troposphere. However, I bet they would have shown an amplified warming trend – a hot spot.

A Digression on Hotspot [HSp] and Hockeystick [HSt]…