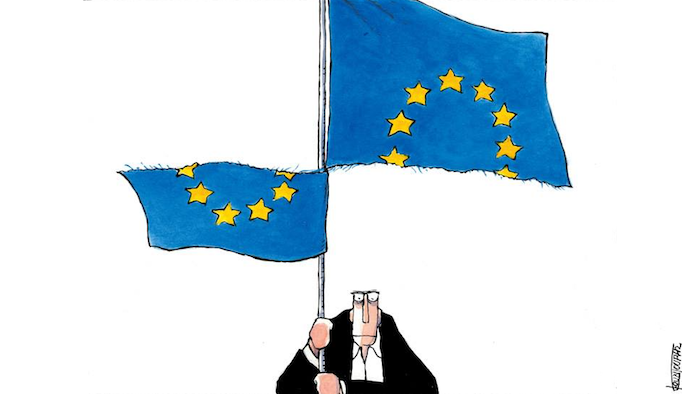 East European EU states are mounting a behind-the-scenes revolt against the Paris Agreement, blocking key measures needed to deliver the pledge that they signed up to 18 months ago.

Under the climate accord, Europe promised to shave 40% off its emissions by 2030, mostly by revising existing climate laws on renewables, energy efficiency and its flagship Emissions Trading System (ETS).

But documents seen by Climate Home show that Visegrad countries are trying to gut, block or water down all of these efforts, in a rearguard manoeuvre that mirrors president Donald Trump’s rollback of climate policy in Washington.

Energy efficiency is supposed to make up around half of Europe’s emissions reductions by 2030, but a Czech proposal could cut energy saving obligations from a headline 1.5% a year figure to just 0.35% in practice.

Below the radar, Poland has also launched a manoeuvre that may block the EU’s winter package in its entirety – particularly a planned limit on power plant emissions – if it is signed up to by a third of EU parliaments, or 10-13 states.

The EU’s various wings will eventually thrash out a compromise between the commission’s original proposal – which was calibrated to meet the Paris pledge – and the counter-proposals designed to weaken this.

The effect this could have on the EU’s overall emissions has raised concerns among those in Brussels who wish to see the EU maintain its leadership on climate.
“We cannot allow backward-looking east EU states to destroy the EU’s credibility on the Paris agreement,” said Claude Turmes, the European parliament’s lead negotiator on climate governance.

“A successful and ambitious energy transition is one of the few remaining positive stories for Europe. If we allow that to be drained by vested old interests from east Europe, our international credibility – and the last remaining trust of our citizens – will be smashed,” said Turmes.

On Thursday and Friday this week, the EU leadership will meet with Chinese prime minister Li Keqiang. Climate change is a top agenda item at the meeting. A Sino-European coalition on climate action has been mooted as a possible bulwark against the reversal in the US. […]

“It is clear that the east European countries are only thinking of cheap energy and nothing else,”…