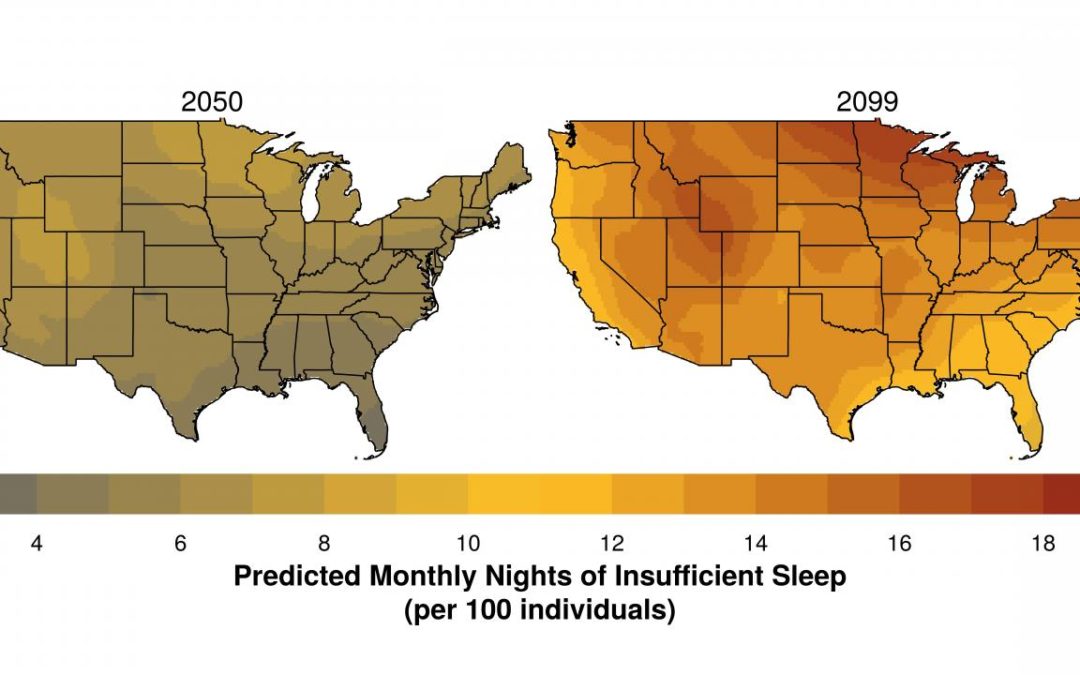 From the UNIVERSITY OF CALIFORNIA – SAN DIEGO and the “correlation is not causation unless we take a survey and plug the results into a model and ignore UHI” department comes this “anything goes” paper that has the magic words for making headlines, but very little if any real science in it.

Climate change may keep you awake — and not just metaphorically. Nights that are warmer than normal can harm human sleep, researchers show in a new paper, with the poor and elderly most affected. According to their findings, if climate change is not addressed, temperatures in 2050 could cost people in the United States millions of additional nights of insufficient sleep per year. By 2099, the figure could rise by several hundred million more nights of lost sleep annually.

The study was led by Nick Obradovich, who conducted much of the research as a doctoral student in political science at the University of California San Diego. He was inspired to investigate the question by the heat wave that hit San Diego in October of 2015. Obradovich was having trouble sleeping. He tossed and he turned, the window AC in his North Park home providing little relief from the record-breaking temperatures. At school, he noticed that fellow students were also looking grumpy and bedraggled, and it got him thinking: Had anyone looked at what climate change might do to sleep?

Published by Science Advances, the research represents the largest real-world study to date to find a relationship between reports of insufficient sleep and unusually warm nighttime temperatures. It is the first to apply the discovered relationship to projected climate change.

“Sleep has been well-established by other researchers as a critical component of human health. Too little sleep can make a person more susceptible to disease and chronic illness, and it can harm psychological well-being and cognitive functioning,” Obradovich said. “What our study shows is not only that ambient temperature can play a role in disrupting sleep but also that climate change might make the situation worse by driving up rates of sleep loss.”

Obradovich is now a postdoctoral fellow at Harvard’s Kennedy School of Government and a research scientist at the MIT Media Lab. He is also a fellow of the Center for Marine Biodiversity and Conservation at UC San Diego’s Scripps Institution of Oceanography. Obradovich worked on the study with Robyn Migliorini, a student in the San Diego State University/UC San Diego Joint Doctoral Program in Clinical Psychology, and sleep researcher Sara Mednick of UC Riverside. Obradovich’s dissertation advisor, social scientist James Fowler of UC San Diego, is also a co-author.

The study starts with data from 765,000 U.S. residents between 2002 and 2011 who responded to a public health survey, the Behavioral Risk Factor Surveillance Survey from the Centers for Disease Control and Prevention. The study then links data on self-reported nights of insufficient sleep to daily temperature data from the National Centers for Environmental Information. Finally, it combines the effects of unusually warm temperatures on sleep with climate model projections.

The negative effect of warmer nights is most acute in summer, the research shows. It is almost three times as high in summer as during any other season.

The effect is also not spread evenly across all demographic groups. Those whose income is below $50,000 and those who are aged 65 and older are affected most severely. For older people, the effect is twice that of younger adults. And for the lower-income group, it is three times worse than for people who are better off financially.

Using climate projections for 2050 and 2099 by NASA Earth Exchange, the study paints a bleak picture of the future if the relationship between warmer nights and disrupted sleep persists. Warmer temperatures could cause six additional nights of insufficient sleep per 100 individuals by 2050 and approximately 14 extra nights per 100 by 2099.

“The U.S. is relatively temperate and, in global terms, quite prosperous,” Obradovich said. “We don’t have sleep data from around the world, but assuming the pattern is similar, one can imagine that in places that are warmer or poorer or both, what we’d find could be even worse.”