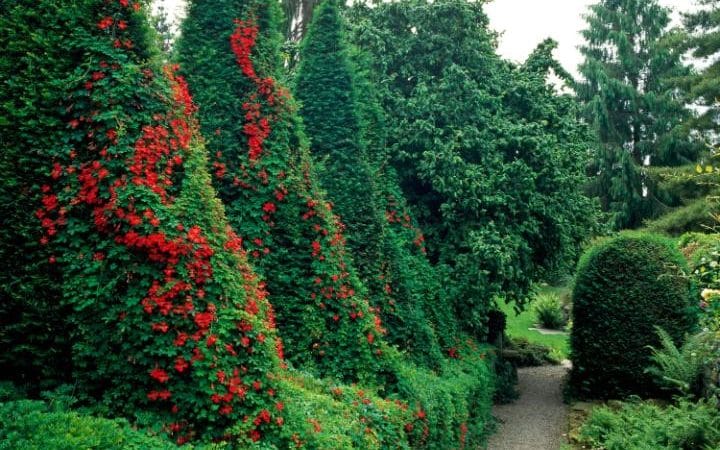 We were impressed with a climbing Tropaeolum speciosum (flame flower) that we saw rambling through a yew hedge when visiting an open garden a couple of years ago. My dad has twice carefully tried to grow it from seed, with the same lack of results. Is there anything special he should be doing? Melaina Cox, via email

In my experience (and I know that I am not alone), flame flower, a herbaceous perennial climber with tiny but abundant scarlet nasturtium flowers, is the very devil to get established. I suggest that your dad give up on the seed, having tried his best, and go for a couple of young plants, probably grown from divisions and available from specialist nurseries, often to be found in areas where the plant thrives, such as Burncoose in Cornwall, or see the RHS Plant Finder for a mail order supplier. Flame flower requires quite specific growing conditions – roots in shade, upper parts in some sun, adjacent to an evergreen (commonly, as you both saw, yew) where its rambling flowers “flame” the best and, that rarest of commodities in such a situation, the famous “moist, well-drained soil”. Oh yes, and that magic soil has to be neutral to acid. And as so many will testify, even if you provide everything on the list above, it can still fail.

Box is notoriously greedy and, when grown in porous pots such as terracotta, thirsty too. Orange-y foliage, often seen on box topiary that has been too long in one container, could indicate the need to repot, or at least to feed. Pruning time is coming up, but ignore the traditional Derby Day date (early June) – it is too early. Clipping box in July or August is preferable.

But let’s put all defeatism aside. What a challenge for your dad. The reason I suggest that he acquires two (or more) plants, is that it will give him a chance to try it in more than one situation in his…