Milky Spore Controls Japanese Beetles in the Yard and Garden 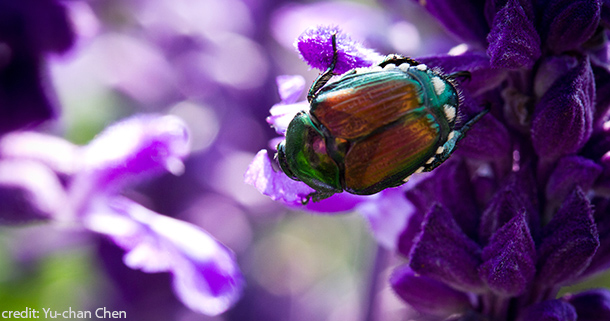 Milky spore is the common name for the bacteria B. popilliae, the active ingredient in some pest control products used to control the Japanese beetle (Popillia japonica). This insect was brought into North America through New Jersey in 1916 from Japan. The favourable climate of eastern North America combined with the 300 host food plants found abundantly in the U.S. caused the populations to explode. Since that introduction, the Japanese beetle has invaded all states east of the Mississippi and north into Ontario, Canada.

The stout, half-inch long beetles are a metallic green and have copper colored wings with tufts of white hair emerging from the bottom of the wings. The adults feed in groups on lush foliage starting at the top of a plant and working their way down. A single beetle does not do much damage on its own, but when beetles congregate, drawn in by a potent scent released by other feeding beetles, the damage is significant. Chewing on the topside of the leaves, the beetles will skeletonize a plant rapidly. They will also feed on the flowers and ripened fruit. These are sun-loving insects that emerge at the beginning of June to feed voraciously during their 30-45 day adult lifespan. The eggs laid during this time hatch after a few weeks and the emerging white grubs feed on root systems for the following 10 months.

By 1930, Japanese beetles were inflicting significant damage on a wide range of North American crops, impacting both agriculture and ornamental plants. Researchers at the time observed that occasionally, the grubs would appear to be covered in a milky residue. Upon further investigation, they discovered that this residue was, in fact, the naturally occurring bacteria, Bacillus popilliae. With the isolation of the bacteria and the effectiveness it displayed under laboratory conditions, it became the first registered microbial pest control agent in the U.S. and has since been sold under various trade names. The most common one is “milky spore.”

There are a few misconceptions that surround this product that could impact the effectiveness of application, so they are important to point out. Milky spore: