‘Ocean Smog’ Is Taking Over The Seas And You’re Probably Eating It, Too 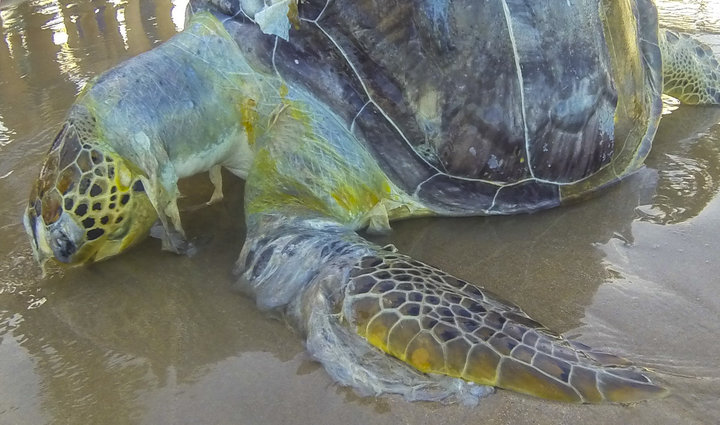 Every year, billions of pounds of plastic waste ― grocery bags, drinking straws, even cigarette butts ― pour into our oceans. Used by humanity for a few minutes at most, these single-use plastics likely will likely stick around for decades, or longer.

Trillions of pieces of refuse get trapped by natural ocean currents, or gyres, at five locations, causing a dance of debris for hundreds of thousands of square miles. While these gyres, geographically removed from civilization, hold much higher concentrations of trash than other regions of the ocean, they’re evidence of a growing problem humans have mostly ignored since we embraced widespread plastic use 50 years ago. But now, researchers are ringing a warning bell: Our reliance on cheap, disposable stuff is smothering the seas, and it’s bound to get worse.

Marcus Eriksen, a co-founder of the conservation group 5 Gyres, likens this growing horror to smog that covers cities like Los Angeles and Beijing.

It’s an apt description. Over time, a plastic item in the ocean breaks down into many tiny particles, known as microplastics ― so many, in fact, that if you were to stand on the bottom of the ocean in the middle of a gyre and look up, the water overhead wouldn’t look clear, Eriksen said.

“What you’d see are these massive clouds,” Eriksen said. “Clouds of micro- and nano-plastics stuck in the ocean’s gyres.”

Perhaps the smoggiest of these gyres is the Great Pacific Garbage Patch, hovering a few hundred miles north of Hawaii. Reports describe it as a floating island of trash twice the size of Texas, so dense you could walk across it, and so vast you can see it from space. But such descriptions are misleading, scientists say.

“The name ‘garbage patch’ is a misnomer,” wrote researchers at the National Oceanic and Atmospheric Administration’s Marine Debris Program in 2012. “There is no island of trash forming in the middle of the ocean, and it cannot be seen with satellite or aerial photographs.”

Rather, it’s more like a swarm of microplastic bits.

At last estimate, there were some 5.25 trillion pieces of plastic trash floating along the surface of the ocean. Waves, salt and UV radiation from the sun will eventually break down these items into microplastic particles, each less than 5 millimeters long. If you tried to account for not just the large pieces of plastic bobbing about, but also the particles, you’d be looking at a number close to 51 trillion, or “500 times more than the stars in our galaxy,” according to the United Nations Environment Program.

By now, plastic bits are so pervasive they’ve spread to some of the furthest reaches of the globe. Just last month,…