Off Panama’s coast, divers resurrect a ‘ghost’ of the deep 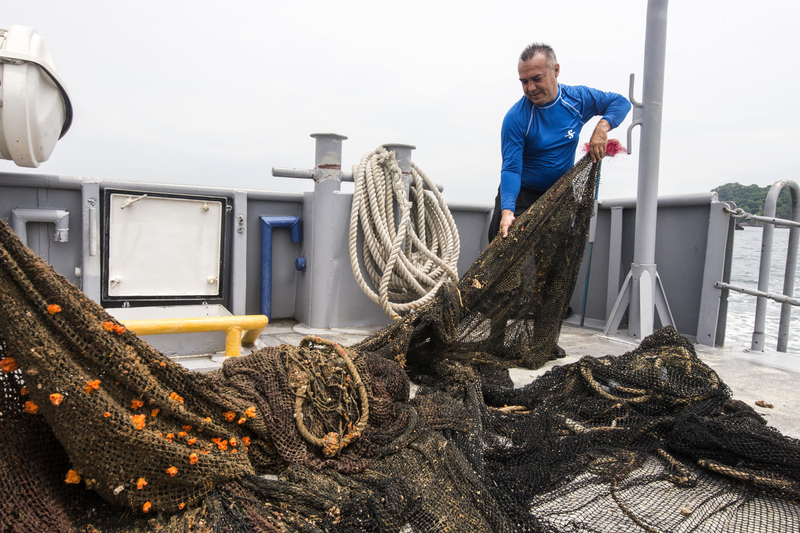 Editor’s note: Edgardo Ochoa was scouting for dive training sites in Panama Bay in 2000 when he made a troubling discovery. Nearly two decades later, as a marine safety officer for Conservation International (CI), he was able to do something about it. This is his story.

Back in 2000, as a unit diving officer at the Smithsonian Tropical Research Institute in Panama City, I was always looking for spots to train my divers. This search took me all over Panama Bay — sometimes to places with absolutely no value in terms of dive training, but sometimes to great sites.

One of the good ones is near Otoque Island, about 43 kilometers (27 miles) southwest of Panama City, with great underwater topography — boulders, cracks, crevices, a few short tunnels and a 24-meter (80-foot) wall — and a wealth of fish, sponges and corals. It was a healthy ecosystem and a perfect training site.

On my first exploration there, though, I found something I never wanted to find.

A huge, abandoned fishing net had come to rest on the seafloor, smothering a considerable portion of the rocky reef.

So-called “ghost nets” are commercial fishing nets that have been abandoned at sea, either lost or deliberately discarded. Carried by currents or tides, they traverse the world’s oceans, snaring fish as they drift. These ghost nets do not discriminate, capturing endangered species (such as sea turtles), all manner of small fish — and no end of marine debris.

The ocean represents a vital source of income for Panama’s coastal people; unfortunately, we also have some problems under the water. Pollution is a problem — fishing nets, lines, hooks and ballast weights are often found by divers in many reefs in the region.

The phenomenon of “ghost fishing” — what happens when derelict fishing gear continues to “fish,” was first brought to the attention of the world at the 16th Session of the Committee on Fisheries of the UN Food and Agriculture Organization in 1985. This gear is still tangling and killing marine life, smothering habitats and even posing a hazard to navigation — relevant in this region due to heavy ship traffic through the Panama Canal.

Throughout the 2000s, I continued to use Otoque Island for training, scientific…