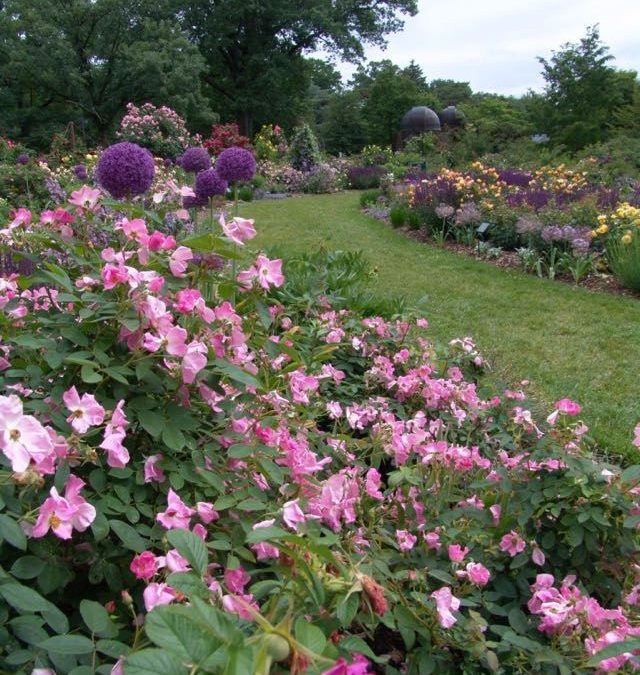 I CONFESS to a decided dearth of roses here in my northern garden, with only a few species types in residence, but Adam Glas is positively surrounded by them daily in his job in the Dean Bond Rose Garden at Scott Arboretum in Pennsylvania.

Adam, a graduate of the prestigious Longwood Gardens Professional Gardener Training Program, joined the staff at Swarthmore College’s arboretum in 2012. The rose garden he’s responsible for was first designed in 1956, then recently renovated to be more sustainable. In a recent chat, Adam shared tips for organic rose care today, both cultural techniques like proper spacing and using fish hydrolysate as a feed and disease-preventive, and also advice on selecting more resistant varieties. We even talked about the dreaded rose rosette disease that has been on the rise in recent years.

If you’re near Swarthmore on May 25 and June 1, 2017, treat yourself to a rose-garden tour, or just listen along as we get a virtual visit with the resident expert. Read along as you listen to the May 22, 2017 edition of my public-radio show and podcast using the player below (or at this link). More about visiting the Scott Arboretum in Swarthmore, Pennsylvania, is at this link, and events are listed in their calendar.

Q. I want to start with a brief background on the garden, and also you: Did you know you’d become a rosarian? You studied horticulture, but was that the direction you were headed in, or did it just happen?

A. It just happened. Having the rose garden here at the Scott Arboretum, it was just sort of a natural progression into roses—not something I necessarily looked forward to taking on initially, but I’m happy that I have now.

Q. So you’ve kind of warmed up to them. [Laughter.]

Q. And a little bit about the garden: as I mentioned in the introduction, it was first designed in the 1950s, so paint a picture of it for us. Is it a traditional-looking rose garden?

A. Initially when it was designed in the 50s, as you said, it was a traditional design. The original garden was laid out in five beds. There was a bed designated to species roses, another two beds for climbers and shrub roses, and then two more beds that were just grandifloras, hybrids teas and floribundas. There weren’t any other types of plants; just roses. So a very traditional rose garden.

Q. I feel like in the pictures I have seen…is it surrounded by the more traditional posts and chain swags? Is there like a border around it?

Q. Originally there were these five beds, and they were divided by class of roses, and it was all roses. Do I take it to mean there is no underplanting—just mulch or something—or are there herbaceous plantings underneath the roses today?

A. Correct—originally it was just roses and mulch basically [laughter], but recently we have transitioned to a more dynamic planting scheme. Roses typically bloom heavily in late May-early June here in the Delaware Valley region, and then they take a break and flower again in late August and into September.

So for many reasons we wanted to create a little bit more of a dynamic space. We’ve added shrubs and perennials, and a few annuals as well, as well as about 120 different varieties of Clematis.

A. Give or take; it’s not a precise number, but there are a lot.

Q. How many kinds of roses are there?

A. There are about 160 different varieties of roses in there. We’ve got species roses, shrub roses, hybrid teas, grandifloras, floribundas, climbers—you name it, we have it. [Laughter.]

Q. Are there multiples of each one?

A. Yes, typically there are. As we’ve moved into a more sustainable approach with the garden, we’re trying new roses–new genetics and new breeding in roses, with roses that are supposed to be disease-resistant and very adaptable for this region. A lot of times we’ll try one, to see how it does, and we may get a few more if it does well.

Q. You mentioned “sustainable,” so when did this renovation or whatever you call it—when did this happen, and how long in the making was it? I know you are involved with various sustainability projects that pertain to roses as well.

A. Exactly. They have been trying to renovate and rethink the rose garden for about 10 years now, and when I started here at the arboretum about five years ago, I was approached with the concept of renovating the rose garden. I was excited for the opportunity—but also along with that, the college has a really strong role in sustainability, so we wanted to do it in a more sustainable way.

It is maintained organically now. We used to go in there every 10 days and do different cocktails of fungicides to control disease, but now it is completely organic. So we have gotten away from what you would consider a traditional rose care.

Q. So that must have been a pretty massive shift: Here you are describing it as in the middle of campus, and in the middle of a lawn—it’s seen by a lot of people all the time, and you can’t have it all defoliating and looking horrendous, right?

Q. I mean, this is conspicuous; it’s not hidden in the back corner somewhere.

Q. To accomplish that, were there changes to the soil—I mean, what happened? Did you dig out plants, or was it just a change in the cultural practices?

A. Sort of all of the above. A lot of the roses were way too close together; they had overgrown a bit. The first year in the transition, I literally just spent pruning, removing suckers, and spacing roses out.

In terms of the soil, the soil in there is beautiful. Since the garden was planted in the 50s, we add about 3 or 4 inches of leaf compost-wood chip mulch mix yearly, so the soil structure is wonderful and lovely. That’s a huge advantage going into this type of system: to have a good soil base to work off of.

Q. Before we go to the next step, you said first year you spent pruning and spacing. For people who don’t know, a lot of rose “problems” come from fungal things, so air circulation—getting plenty of light and air—is like an antidote to that. Is that sort of the basic idea of what you mean when you say you spent this time pruning and spacing?

A. Light and air infiltration is critical in terms of a lot of the fungal pathogens that roses can get, especially black spot. Black spot is the biggest issue in our region with the roses, keeping them healthy and happy. That also allowed us room to incorporate other plant material. We’ve incorporated Clematis, but we’ve also incorporated perennials and some…