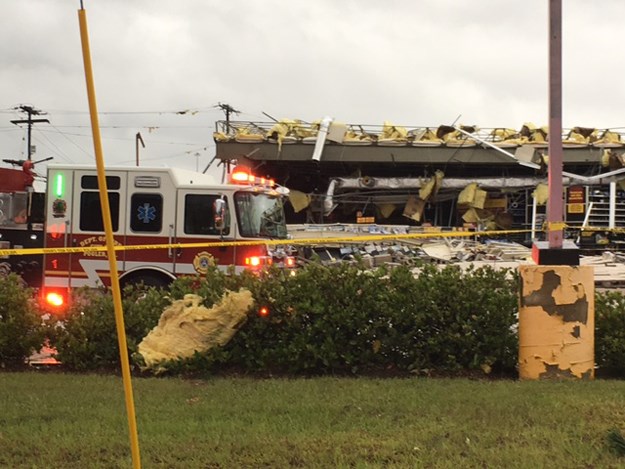 Many people living and working along Highway 80 were simply caught off guard and stunned by the damage and debris left behind by that powerful storm.

According to Chatham County officials, it is estimated that 14 structures in Chatham County were damaged by the storm. Five minor injuries were reported with one person going to the hospital.

WTOC’s Tesia Reed was first on the scene to take the picture below of Advance Auto Parts on Highway 80 in Garden City.

The 80 Quick Stop was one of the businesses damaged, with some roofing caved in on the backside and damage to several trucks in its parking lot. Also in that parking lot, an SUV’s passengers had just gone inside the building when the wind tossed a shed onto the side of their vehicle.

Bystanders and emergency officials alike assessed the damage, some not able to take their eyes off the devastated store fronts and piles of debris all around them.

“It’s unbelievable, I’m speechless. I’ve lived over here for several years, and I’ve never seen anything like this before,” said Salena Mitchell Rawls, who lives down the road.

“I was driving right over here, that red brick building, right here. And when I got up to the building, all of the sudden you heard the boom, you saw the lightning, it was blue sparks like it hit something. And then all of a sudden it was on us, there was nothing else to think about,” said Rep. Carl Gilliard.

Rep. Gilliard says he plans on working closely with the mayor and council of Garden City, and will also contact the governor’s office once the damage assessment is completed.

One man said he was on his way home from work when the rain came. He had to actually lay…