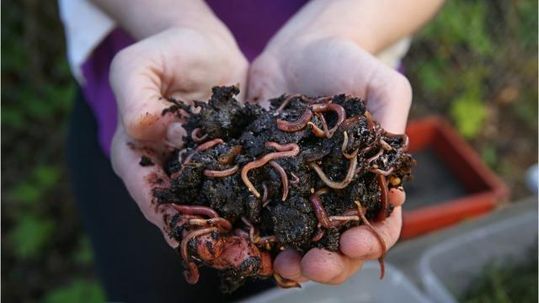 Composting food scraps at home with a “worm farm” is one of those things that sounds cool.

Aren’t the bins expensive? Will the food stink as it breaks down? Does this mean worms in the house?

Amber Powers, a home gardener and composter, eliminates excuses. She teaches the curious and timid — from students in the Rochester City School District to adults — how to set up an inexpensive, efficient system that turns vegetable scraps into rich soil with minimal muss and fuss.

“What I want people to do is get a feel for it and see if it works for them,” Powers said.

Worms do need a constant temperature, but they don’t have to live in the kitchen. They could be fine in a basement or attached garage.

“For kids, it’s really exciting to see what an ecosystem can do,” she said. “For a family to do this, it’s a really nice way to get your hands on really nice compost. People call worm castings black gold. It’s very expensive. If you don’t want commercial chemical fertilizers and you’re trying to keep things safe in your garden, this is a great way to turn waste into something wonderful you can use and you don’t have to pay for.”

The most expensive ingredient may be the worms. Powers said enough people are doing this and most are willing to start you off with a few handful of worms. You’ll need at least three stackable plastic bins that you’d use to hold crafts; some lettuce, soil, twigs and/or coffee grounds for bedding; and scraps.

Put a small rock in each corner of one bin, which will be the base.

Use a drill or wood-burning tool to make a series of holes in the bottom of the other bins.

Stack one of those bins on the bottom bin. The rocks will provide space for liquid that drips through the holes.

Lay bedding in the top bin

Loosely place some of the…