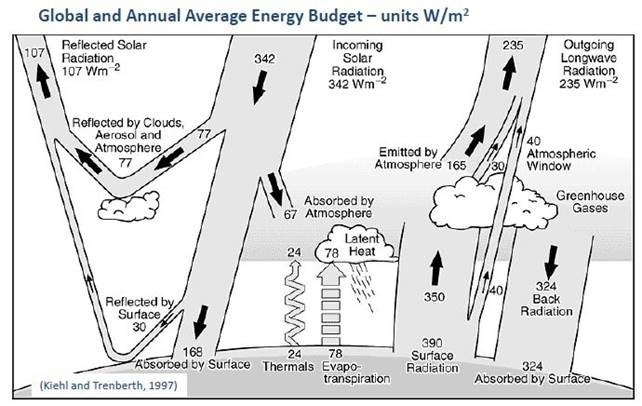 Author: Mike Jonas / Source: Watts Up With That?

Heat is the random mechanical energy of massive particulate matter. The absolute thermodynamic scale of Temperature (kelvin) is defined in terms of that ean energy per degree of freedom of the various mechanical motions those particles can have, such as translational in xyz, and rotation about three mutually perpendicular axes.

So without physical matter that can be found somewhere on the periodic table of the elements, there can be NO HEAT !

So HEAT (energy) is NOT transported by electro-magnetic radiation, such as we get from the sun.

As far as the ENERGY that earth receives from the sun is concerned; it is for all intents and purposes almost pure BLACK BODY thermal radiation in the electromagnetic spectrum , so you can consider it as Hertz / Maxwell waves, of as photons in chunks of h.nu.

We make ALL of the heat right here on earth by absorbing most of that solar radiant energy in lossy processes, such as absorbing it in the deep oceans. Botanical processes convert some of it into bio mass, etc., but most of it is immediately converted to WASTE HEAT; but we get NO HEAT from the sun. we get almost pure Black body radiation energy; NOT HEAT. There is NO massive material to transport mechanical energy of HEAT (noun) either by conduction or convection.

YES I do know the sun hurls a thimble full of charged particles at the earth each year.

If you want to compute the possible conductive heat transfer to the earth along a long (guard ringed) rod (ignoring that the sun will evaporate much of it) with copper, you will get a few microwatts per square METER.

The sun is powered by the force of gravity. That force alone would collapse the sun into nothingness, if it wasn’t for thermonuclear fusion coming along and screwing things up to stop the collapse. That raises inner Temperatures to multi million kelvin temperatures, and somehow some of the thermal energy makes it to the cold surface which is somehow only 6,000 kelvin, and the surface neutral plasma is the resultant black body radiator that send EMR to earth.

Dr S can correct all of my approximations and mistakes but that is basically what is happening.

I don’t care what professor YOU had at whatever UNIVERSITY who told YOU that “HEAT” (noun) is transported by electro-magnetic radiation.

(S)He’s just plain wrong. Heat requires the presence of matter, and without that matter, there is…