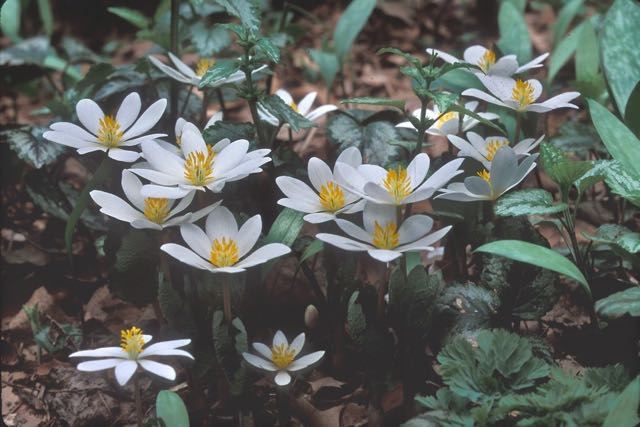 I’VE BEEN DIGGING this spring—the expected outdoor kind, and then when it’s dark or pouring or something else prevents the garden variety, I’ve been digging around the New England Wild Flower Society website, online home of the oldest organization in North America dedicated to the conservation of native plants, reading about the state of native plants and efforts to save them, about relationships between plants and pollinators, about invasive plants, and more more more.

I was recently treated to a conversation with the Society’s Senior Research Ecologist, Dr. Elizabeth Farnsworth, who agreed to indulge my insatiable curiosity first-hand—about topics as diverse as why to love (not loathe!) ants, or what roles ferns play in ecosystems, and just her general optimism despite so many despairing headlines environmentally.

Elizabeth, who has worked at the Society since 1999, has directed several special projects there, including more than one-hundred Conservation and Research Plans for rare plants, and the building and promoting of Go Botany—an online resource that we’ll hear more about in a moment. She has conducted research on plant ecology, physiology, evolution, and responses to climate change, serves on several graduate faculties, and has authored and/or illustrated seven books.

Read along as you listen to the May 8, 2017 edition of my public-radio show and podcast, using the player below (or at this link). Be sure to check at the bottom of the transcript to all their resource links, including garden-visiting information, links to their native plant webinars, to and more.

Q. As I said in the introduction, I have been rooting around and have learned so much, and am grateful for the website. When I first visited Garden in the Woods, one of the headquarters of the Society, and I continue to be inspired by your online presence as well. Good stuff.

Just a very quick sort of mission statement, perhaps for those in other areas, or who have never visited the Society or its website: What does the Society do and for how long has it been doing it?

A. We’ve been around for about 117 years, so we are the oldest organization in North America dedicated to the conservation of native plants. Our mission is to conserve and promote the region’s native plants, in order to insure healthy and biologically diverse landscape. That’s a lot of what we’re about.

Q. That’s pretty serious; 117 years. Many people think this is new, the thought of native plants—like we just all started thinking of that. But quite to the contrary.

A. No, in the early part of the 1900s, there became an awareness that there was a tremendous amount of over-collecting of native plants in the wild, by people who were collecting bouquets. They began to collect almost industrially. This Society and a number of other societies, like the Hardy Fern Society, really sprung into action at that time—and the Audubon Society.

Q. I have a confession, Elizabeth: I am addicted to GoBotany; I am powerless over GoBotany…

Q. …which is a tool on the Wild Flower Society website that’s easy to find—GoBotany dot NewEnglandWild dot org—I use it all the time. I’m not technically in New England; I’m in New York State, but whatever. Can you tell us briefly tell us about what it is, and what people use it for? I know I use it because I love the range maps [left side of sample plant-profile page, above] especially as mentioned, to see where plants are native to specifically, as opposed to saying just, “native plant,” which is a little generic.

A. Go Botany came about because we had just published the Flora Novae Angliae, or Flora of New England, which is a key in a book form to all 3,500 species of plants native to or naturalized on the New England landscape. We wanted a way to be able to get that out to many more people in an interactive form, and we also wanted to be able to draw a younger generation, who are obsessed with technology, to be obsessed with plants via their obsession with technology.

So we wrote a grant to the National Science Foundation; they funded us for $2.5 million—thanks to everyone whose tax dollars have paid for this. There are worse things to spend them on. It was a four-year project to develop an interactive and fun key to all of the plants of New England.

We have several ways of approaching how to identify plants. You might find yourself in front of a plant in the wild, or around your neighborhood, and you have your cellphone. You can take your cellphone out and use Go Botany, and it’s entirely free anywhere you have wifi or a cellular connection.

You simply go through a few steps to be able to narrow down what your species could be. We take you through those steps; we ask you some simple questions about the plant. We show you photographs of possible matches to the plant you’re trying to identify.

We also do have a technical dichotomous key for more expert botanists to use—but all of the terminology on the website, the botanical terminology, we’ve tried to keep to a minimum with our interactive keys—but they’re all defined on rollover. So if you roll over your cursor on a particular term, or tap on one you don’t understand, you will get an illustration and definition of that term.

Alternatively, you can simply search on a species you are interested in.

Q. And that’s what I am addicted to, I will confess.

A. [Laughter.] There you go. So you want to learn everything you can about Acer saccharum, our sugar maple [above], you use our search tool. Our search tool is very forgiving—you can search on the common name, or on the species name—the scientific or Latin name.

Or if you happen to know your species by a scientific name that is no longer recognized—oops!—such as Cornus canadensis. That our lowly bunchberry, for example, which is now known under a totally different Latin name. This is how botanists keep off the streets; we change the Latin names. [Wikipedia image of bunchberry below by D. Gordon E. Robertson.]

A. I know. I am still deeply in mourning for Cornus canadensis, because I cannot actually pronounce the genus name that it now has. [Laughter.]

A. But you can search under the synonyms, the previous names—and the search engine will give you an answer. The other thing about Go Botany is that we wanted to create a community, of people who were interested in plants at whatever level, whether you’re an expert, or just getting into plants. So we created an online interactive community a little bit like Facebook, if you will, for plant geeks. We call it Plant Share—we were going to call it FacePlant, but it did not work out. [Laughter.]

That’s a place that you can go, and you can post sightings of plants you’ve seen in the wild, or interact with our research biologist Arthur Haynes, if you’re having a little bit of trouble identifying any plants from Go Botany. You can post photos of those plants and get an answer back.

Q. So lots of ways to use it, and dip in. I use it as a reference tool or encyclopedia—a plant database—but lots more ways to use it. I think it’s a great tool, even if people don’t live literally in New England. It includes a lot of information about plants that may be more widespread [in their native ranges] than just New England.

A. Absolutely. It’s relevant to a much larger region than New England. We get requests to use some of the 37,000 photos on that site from all over the world. It’s great.

Q. In my further digging that I described in the introduction, I read the admittedly pared-down…